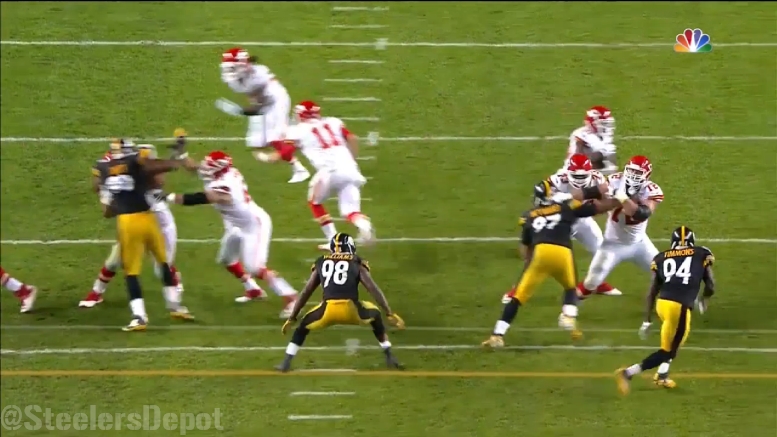 Topic: How much should we be concerned with the Steelers’ failure to address the passing-downs inside linebacker position?

The Steelers had eight picks in the draft, and one of the few positions they didn’t address was the one where they actually lost a starter in Lawrence Timmons. While they believe they have at least a potential heir apparent in Vince Williams, many were expecting the team to add a more athletic linebacker or a versatile safety that might be able to play on passing sub-packages.

None of that happened, and Williams showed on social media that he was feeling pretty good about it—basically the opposite of what he felt following the 2014 NFL Draft when the Steelers took Ryan Shazier he ‘started’ during his rookie season.

One thing we do know is that Williams is a pretty smart player, and a physical downhill presence. He has done well in spot starts over the course of his career, even if he hasn’t been significantly tested during the regular season against the pass.

He may not be the most athletic linebacker, but I’ve often wondered if the criticism of his ability to drop into coverage is not oversold. He had a couple of issues in the preseason a couple of years ago while they were breaking in more Cover 2 concepts, but that was a learning curve. That doesn’t mean he can’t do it.

Of course, it doesn’t mean he can, either. It’s really something that we have to see more to know more. But the skeptics no doubt would have preferred to be safe rather than sorry, taking an athletic inside linebacker or a ‘moneybacker’ from the safety position to take the buck linebacker off the field in obvious passing situations.

At the very least, it would have given the coaching staff more options to work with. As it is, they are now pretty limited, and their inside linebacker depth is now awfully inexperienced, even if not necessarily thin in terms of numbers.