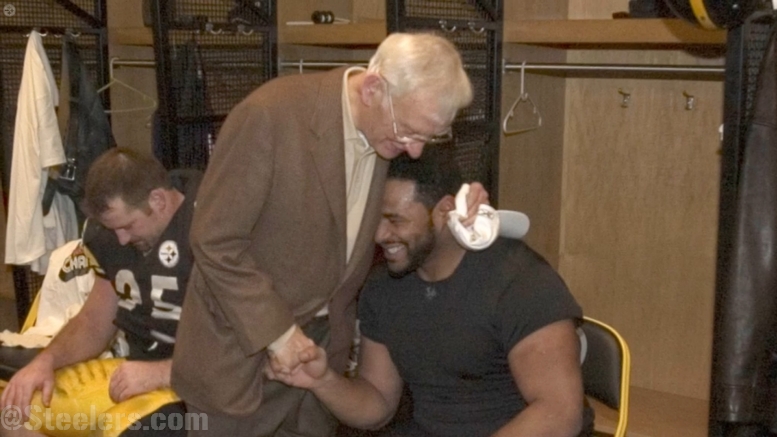 As I was scrolling through Twitter yesterday, I came across a Tweet from AP reporter Will Graves covering the funeral of Pittsburgh Steelers owner Dan Rooney. The tagline of the Tweet read, “the proof of Dan Rooney’s legacy sat in the pews [at] St. Paul’s Tuesday. A cross section of a singular life well lived”.

It struck me because I felt that it so suited exactly the nature of the event, and since I feel there is nothing to improve upon in the sentiment, I believe it appropriate to allow it to serve as the lead into this article.

That seems to be, at least to some degree, the premise of a collaborative article that went up yesterday on The Players’ Tribune, to which five current or former members of the organization relayed their stories with Rooney. Former players Hines Ward and Jerome Bettis, current players Ryan Shazier and Cameron Heyward, and friend and co-owner Thomas Tull all contributed to the piece.

The end result was a bit of, as Graves wrote, a cross-section of Steelers history, at least recent history, though of course many Steelers of a greater vintage, most notably Joe Greene, also paid their respects individually in other venues.

Ward’s tale is one that I have already written about. He recounted his holdout prior to the 2005 season, and how Rooney’s words upon his return helped ease him back into the fold and led him to regret his decision. That made it all the more important when he helped bring him another Super Bowl after decades, and to do so as the MVP of the game.

As for Bettis, he shared a story of Rooney’s selfless generosity. Early in Bettis’ career, word got to the owner that his young running back’s family would attend every game, even on the road, but would have to go for the nosebleed seats away from Pittsburgh.

He called Bettis into his office and gave him his own tickets, behind the players’ bench, for his parents. “From that day forward”, he wrote, “for every road game my parents sat a few rows behind the team bench. And that meant that I could always find my mother and father in the crowd”.

Shazier spent the least amount of time with Rooney among the contributors of the article, but he recounted the man’s genuine interest and concern for the wellbeing of strangers and friends alike. He also recalled the draft-day question he was given: “are you ready to be a Steeler?”, he was asked. “Not everybody can be a Steeler”.

Heyward called a day during his rehab last season, when, he writes, Rooney “was going through some physical therapy of his own”. Yet he asked Heyward how he was doing, and told him that the Steelers always have his back.

Co-owner Tull first met Rooney over a decade ago, and since then always sought him out for council. He said that the thing that he recalls most from his wisdom was something that he always told him: “life is a series of decisions you make that add up to your reputation. Do the right thing”.

Rooney lived a life of doing the right thing, day after day, and upon the end of that life, it resulted in the cross-section of life that we saw filling the pews. A life well-lived indeed, and one that made the lives of many others better.