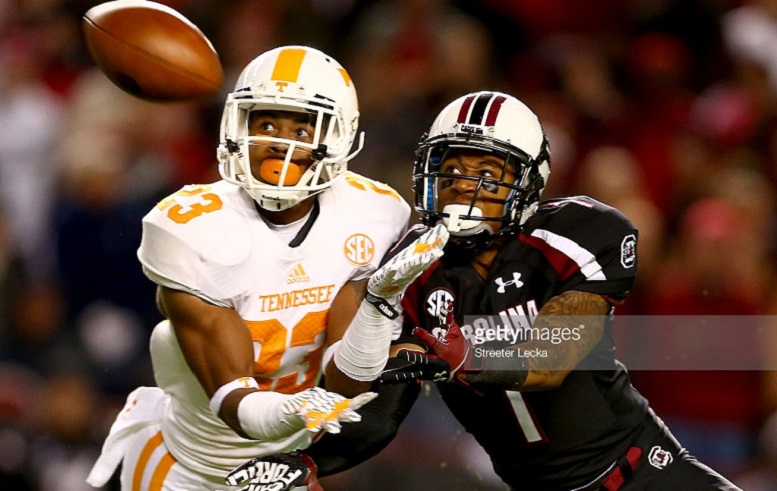 As expected. the Pittsburgh Steelers selected a cornerback during day-two of the 2017 NFL Draft and they did so with their first of two third-round picks. Drafted with the 63rd overall selection was Tennessee cornerback Cameron Sutton, who measured in at the scouting combine at 5112, 188-pounds. After he was picked, Steelers defensive backs coach Carnell Lake talked about Sutton during a short press conference.

“Cameron is a press corner and plays close to the line of scrimmage but can also play off,” Lake said. “He does a good job of mirroring the receiver. He stays close, and that shows in his productivity as a corner for Tennessee over the years in his career. He has led his team and is the all-time leader in passed defensed for Tennessee. He knows how to cover, he stays close, and that is something that we’ve been looking for in the draft. In the third round, he was available and that’s why we took him.”

Sutton, a four-year starter at Tennessee, totaled 127 total tackles during his college career in addition to 7 interceptions and 37 passes defensed. Most of his playing time appears to have been on the left side. With that said, Lake said Friday night that he’s not ready to say if Sutton will play outside or inside with the Steelers.

“We’ll take a look,” Lake said. “Cameron has probably been someone who has done both. We’re looking to see what he can do when he gets here, to see if he can play inside or help us outside. The more versatile he is, the quicker he can get on the field. We’ll just have to take a look and see where he best fits when he gets here.”

While there was talk ahead of the draft that Sutton might have to make a move to safety at the NFL level, Lake made it clear Friday night that he views his newsnet player as a cornerback.

“I think he’s built like a corner,” Lake said.

Sutton, who has already graduated from Tennessee with a degree in communication studies, also served as a team captain, which is something the Steelers value when evaluating players they might want to draft.

“You know leadership is big,” Lake said. “We’re always looking for that. That means if he thinks of himself as a leader, he probably takes pride in his preparation and his communication skills, so that’s always helpful in the secondary. I hope that’s true.”

According to Tennessee defensive coordinator Bob Shoop, Sutton is also a very smart player who is dedicated to his craft.

“He’s a pro,” Shoop said over a year ago. “He takes every rep very, very seriously; he doesn’t waste a rep. You’ll have a hard time finding on film any time he’s misaligned or reading an improper key or playing a bad technique.”

While Sutton wasn’t brought in for a pre-draft visit, the Steelers had a large contingent at the Tennessee pro day that included head coach Mike Tomlin and defensive coordinator Keith Butler being on hand.