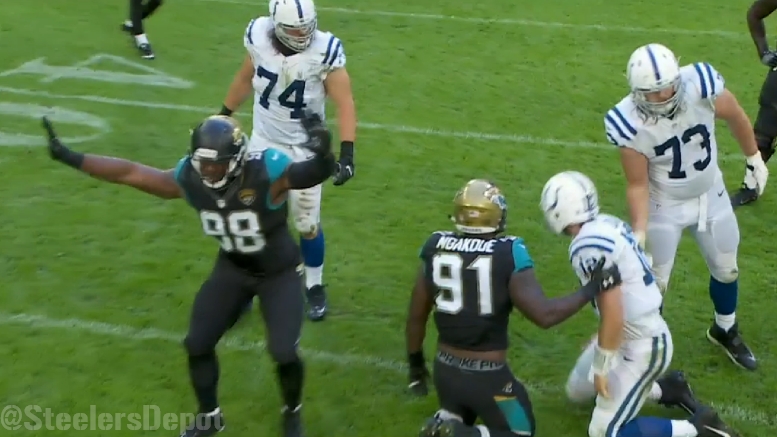 Over the course of the offseason, the Cincinnati Bengals have taken some significant hits during free agency. They lost their two best starters along the offensive line and took a smattering of hits elsewhere on the roster. Two of them came alone the defensive ling.

A couple of days ago, they made a trade for some pass-rushing help, sending a conditional draft pick—likely to be a seventh-rounder—to the Jaguars for the depth pass rusher, Chris Smith. Despite the fact that he has only logged a couple hundred snaps on defense in his three-year career, he has still managed to record four and a half sacks.

The Jaguars have pretty much used Smith primarily as a specialist on passing downs, and even then relatively scarcely, but the Bengals are hoping for a cheap addition to bolster their pass-rushing prowess with the trade, which should in the end not cost them a great deal.

Smith, a former fifth-round pick of the Jaguars in 2014, is somebody that the Bengals were interested in that year, and had him graded a bit earlier. Playing for the Jaguars these past three years, he was, of course, a teammate of current Pittsburgh Steelers defensive end Tyson Alualu.

Still, Bengals site columnist Geoff Hobson writes of the trade that it should not influence the Bengals’ draft plans at all in a draft in which he says that they are expected to address the edge position multiple times in their 11 draft picks in a couple of weeks.

Hobson also mentioned Marcus Hardison, whom the Bengals drafted in the fourth round of the 2015 NFL Draft. He spent all of his rookie season on the 53-man roster, but on the game day inactive list. During the preseason in 2016, he suffered an injury that landed him on injured reserve. He has, thus, yet to play in an NFL game.

In addition to Gilberry, there is also Will Clarke, a third-round pick in 2014 who received his most extensive playing time last year, gradually seeing an increased role over the course of the season. He recorded a total of 15 tackles and flashed with four sacks. He had just a half a sack in his first two seasons.

Still, the Bengals are interested in upgrading their edge positions, especially with their two starters beginning to creep up to the age of 30. Carlos Dunlap is still producing with eight sacks and three forced fumbles, but Michael Johnson, in spite of his run defense, has only had more than six sacks once in his career, and just three and a half in 16 starts last year.

The addition of Smith is an exceedingly modest one, and it’s not guaranteed that he will even make the roster. He is listed at 6’1” and 262 pounds, which certainly doesn’t sound all that much like a traditional 4-3 defensive end. But if he proves that he can provide a situational pass-rush spark, the Bengals may be happy to take him.