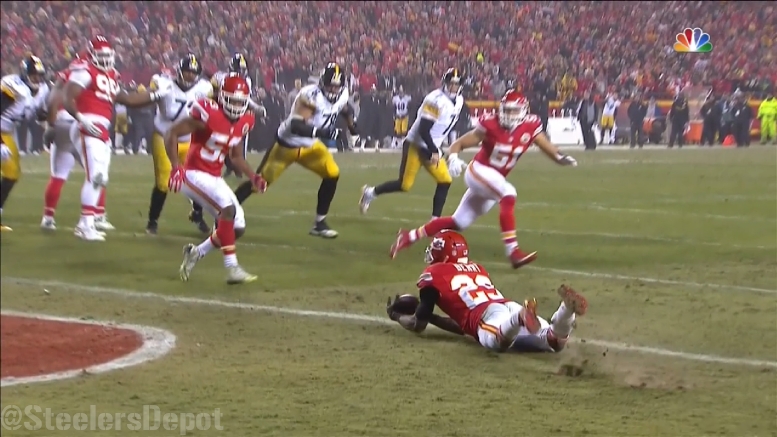 Question: Why did the red-zone offense go cold in the playoffs?

There has been some discrepancy in commentary over the course of the past couple of seasons about the Steelers and their red-zone offense. What I have found statistically is that they are not in nearly as bad of shape as some think, as their overall numbers  the last two years have been bogged down by significantly poor performances from when Ben Roethlisberger is not in the lineup.

In fact, when the Steelers have Roethlisberger, at least in 2015, they were near the top of the league during the regular season in red-zone efficiency. Within that, and particularly last season, however, was a concerning home-road disparity.

So in attempting to answer the question of why the Steelers’ red-zone offense bottomed out in the playoffs, we do inevitably have to start there. Because actually in their first playoff game, which they hosted, they did go two-for-three inside the red zone in a comfortable 30-12 lead.

But the game in Kansas City was anything but comfortable with their four trips inside the red zone that ended in failure, coming a two-point conversion away from facing a late tie game. They went just one for three in New England, with the score coming in the second quarter.

As is frequently the case, whenever you see a team go three-for-ten in the red zone over the three-game span, there will inevitably be a number of factors at play. Against the Chiefs, play-calling was blamed for the first red-zone failure. Another resulted in an interception, of course. Others showed obvious execution errors.

But when we’re dealing with a larger body of work, with 10 opportunities reflecting a decent sample size, what can we draw from this? What led to the Steelers’ decisions and actions? There was obviously instability due to injuries at the wide receiver and tight end positions. How big a role did the available personnel at the skill positions play in contributing to the red-zone struggles? How much of it is just an inability to execute in hostile environments?