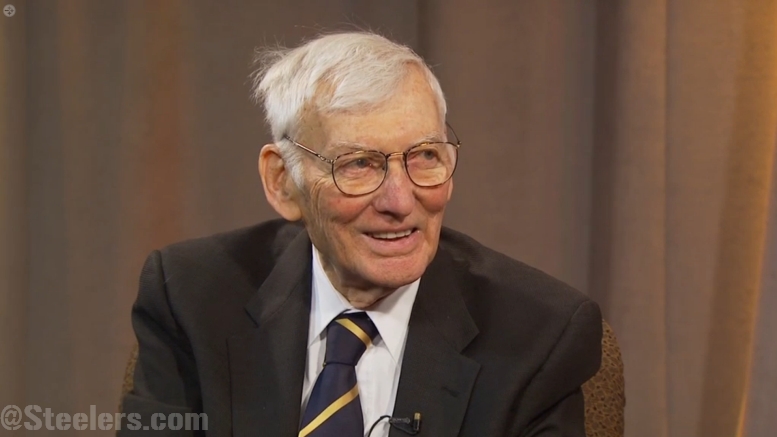 Question: What is your favorite anecdote, either personal or otherwise, that best sums up Dan Rooney?

Steelers Nation is mourning today, and rightfully so, following the death of Chairman Dan Rooney, who for over five decades was integral in making sure the Steelers franchise was steering the ship in the right direction. And more often than not, his compass was truer than anyone else’s.

So much has been said about him over the course of the past day since news of his death hit the public record. Literally dozens upon dozens of people, among them former players and coaches, have very willingly given interviews talking about how important Rooney was in his life personally and of how great a man he was. They have been comments that do not ring of the hollowness of generic platitudes, showing that Rooney truly touched their lives.

The vast majority of us following this site have most likely never gotten an opportunity to meet with Dan Rooney in person, or likely even interact with him in any meaningful way, but the comments section has already shown that that wasn’t universally the case.

Alex Kozora is going to share a number of his favorite anecdotes about Rooney throughout the years a bit later on in the day, and believe me, it is well worth reading. But for a man who lived such a life and influenced so many people, there is an awful lot of ground to cover.

I don’t know what I could truly say is my favorite, but one that stood out to me yesterday came courtesy of Joe Greene, who gave an over-the-phone interview to Ed Bouchette for the Pittsburgh Post-Gazette. Rooney had evidently not been doing well for at least a little while. He did not attend Mel Blount’s fundraiser last Friday. Art Rooney II invited Greene to see his father the next day.

Bouchette asked Greene to recall some memories from his many years with the man. He recalled the day he chose to retire, and Rooney’s response after telling him.

“Joe, you remember that game in Philadelphia when you threw the ball into the stands?”, Rooney asked him. Why now, Greene asked him. “Well, Joe, I felt the same way”, he said. What that meant to Greene is that “he saw the person behind all those tirades and bad acting on the field, that I wasn’t a bad person, I just wanted to win very badly and he saw that”.

What it means to me is that Dan Rooney wanted to win just as badly. And boy did that mean something for the franchise.