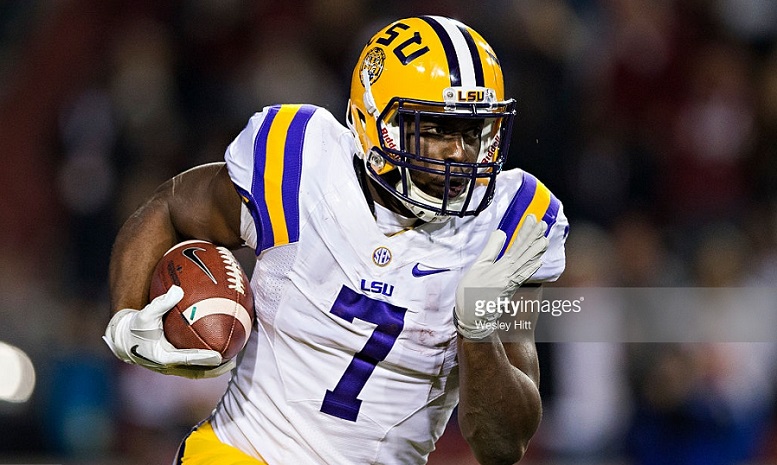 – Extremely powerful runner who delivers crushing hits when he gets up to speed
– Excellent acceleration/quickness in tight spaces, especially for his size
– Great pass blocker, (97 percent pass-blocking efficiency in each of his three seasons at LSU. –Pro Football Focus)
– Has homerun, breakaway speed; (capable of outplaying his 4.51s 40-time)
– Able to wear down defenses throughout a game
– North-South runner who gets upfield quickly and picks up positive yardage. He also runs with a good lean, which allows him to always fall forwards when being tackled.
– Does a fantastic job of keeping his feet moving and driving forward through initial contact

– His patience in letting his blocks develop can improve; he was sometimes premature in looking for cutbacks
– Doesn’t necessarily anticipate holes, he likes to see open grass rather than waiting for it to open up
– Not a great receiving threat out of the backfield, (not a natural pass catcher or route runner)
– Footwork can improve, frequently false steps at the beginning of plays. This is a very minor criticism, however, as it simply affects timing and should be correctable.
– Not the most dangerous open-field runner: He’s great at making guys miss in small spaces but is not quite as elusive in the open.
– Although he had many highlight-caliber trucks and broken tackles, Fournette seemed unusually susceptible (given his size/physicality) to being tripped with arm tackles when he was running through the line of scrimmage.
– Durability and Injury concerns: His physicality could wear him down over a season and may limit his career longevity as well. He also had an ankle injury that sidelined him for several games in the 2016 season.

Leonard Fournette is an amazing physical specimen with unbelievable power. It was easy to get distracted from objectively analyzing his game when watching the 6’0” 240lbs running back routinely hurdle defenders, bulldoze linebackers, and outrun defensive backs. Given his supreme physical talent, it’s difficult to imagine him not enjoying at least some success in the NFL.

On the positive side, Fournette’s blend of power and agility make him one of the most unique players to enter the league in several years. He forces defenders to choose between engaging in full-speed collisions, or instead staying balanced/in-control to preempt juke moves. This play against Ole Miss is an example of what happens when defender’s unwisely decided to slow down when trying to make a tackle:

Conversely, this next clip against Alabama is an example of Fournette’s ability to make defenders miss if they take an out-of-control approach. It’s plays like this that just blow my mind when I remember that he is 240lbs:

Here against Syracuse, Fournette demonstrates his breakaway speed en route to a 87-yard touchdown run. Once he accelerates through the hole and slices through the heart of the defense, no one is able to catch him:

In this next clip, Fournette shows his great blocking technique by keeping a solid base as he squares up on the defensive end. He also does a nice job of using the DE’s momentum to guide him safely behind the quarterback. As mentioned above, Fournette had better than a 97% pass-blocking efficiency rate in each of his three seasons at LSU, which is a stat that might be the most attractive to pro scouts, given the pass-happy nature of many NFL offenses:

Despite Fournette’s extremely high-upside and great athleticism, there are still a couple of downsides regarding his playing style. For example, it’s possible that his physical running could lead to durability issues over the grueling NFL season and could also accumulate to shorten his overall career. Additionally, his downhill and continuous full-speed running style sometimes limited his patience and clouded his field vision, causing him to abandon blocking schemes too early and cutback prematurely. This next play against Wisconsin is one illustration:

– LSU is running a stretch play, with the fullback acting as Fournette’s lead blocker: 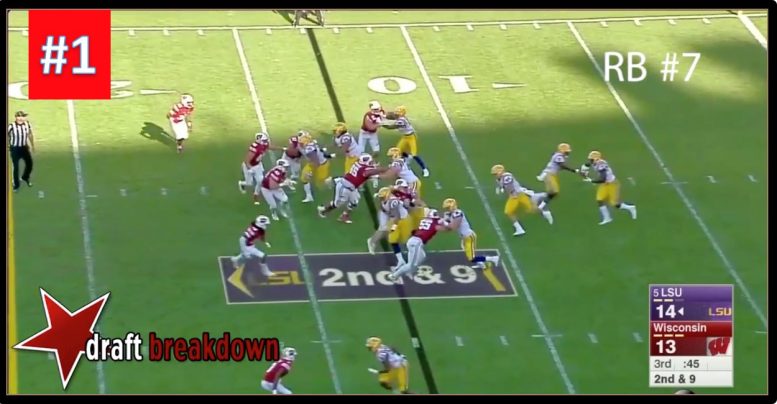 – Although his blocks are setting up nicely on the front side and despite having a numerical advantage, Fournette looks for the backside cutback immediately upon receiving the ball: 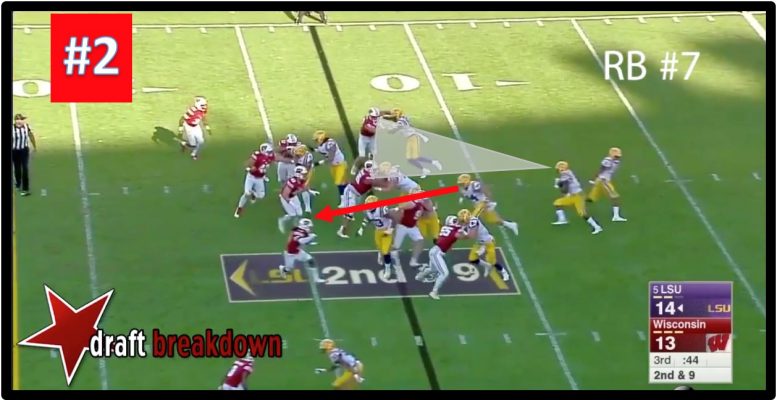 – Moving the clip forward a few frames, it’s easy to see the seal blocks that develop which create a clear running alley: 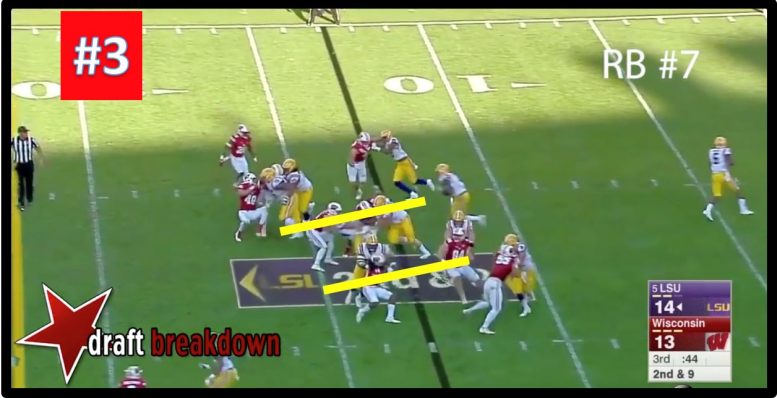 – Lastly, although Fournette picks up a decent chunk of yardage, this play likely had much more potential if he was a little more patient and trusted his blockers. There was a lot more open grass on the front side of the play: 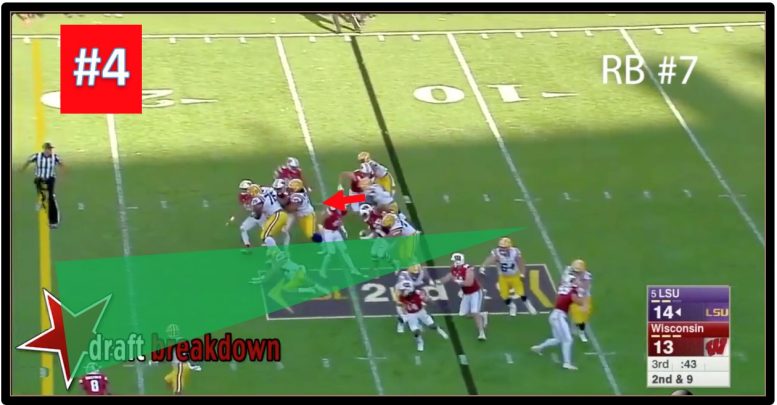 I realize that it’s easy to critique a play like this when I’m not on the field watching it in real time from Fournette’s perspective. Also, to be fair, his decision to make the backside cutback did result in a positive 7-yard pickup. However, I’m using this run to illustrate a broader point that occasionally Fournette’s preference to quickly get moving upfield would cause him to sacrifice bigger, more explosive gains. He could benefit from watching some of Le’Veon Bell’s game film and slowing down just a bit in order to set up a few more blocks.