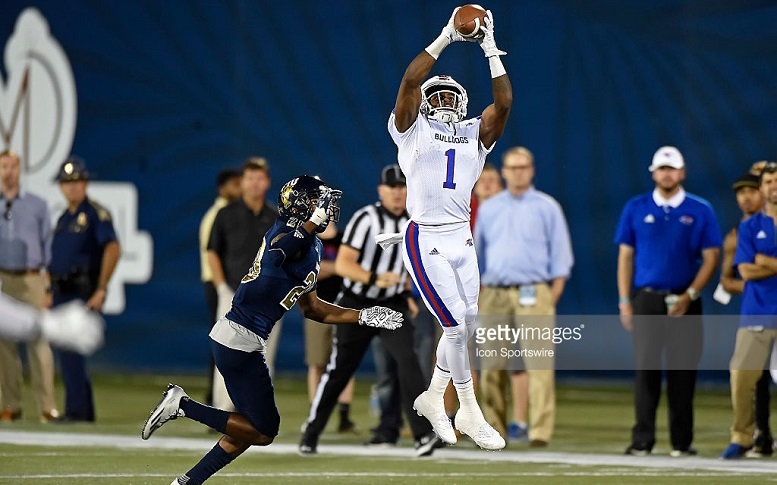 –Soft hands and ability to shield defenders from the ball.
–Great balance and quick feet that allows him to change directions.
–Physical and powerful for his diminutive size.
–Accelerates to full speed within 5 yards of line of scrimmage.
–Uses double moves well, never breaking stride to get over the top.
–Excellent kick returner with 3 career kickoff returns.
–Spin and juke moves that create separation in the open field.

–Played in a weaker conference with less than NFL caliber competition.
–Didn’t run a complicated route tree.
–Gets banged around by bigger defensive backs.
–Doesn’t attack ball in the air, lets it come to him.
–Barely lined up against a corner using press coverage, will need to get used to it.

The outside receiver is sent in motion before the snap of the ball right into a jet sweep handoff. #1 reads his blockers seeing a lane developing on the outside. Henderson accelerates down the sideline for an 11-yard gain showing off his good vision and balance.

#1 catches the kickoff at the two yard line and makes his way towards the 20 yard line before stutter stepping through one pile of bodies. He sees an opening on the left side of the field and accelerates using his good center of gravity to buck off several defenders. Henderson explodes past most of the kickoff coverage hugging the sidelines before getting forced out of bounds at his opponent’s 23 yard line. This returns shows his vision, speed, and balance all working together.

Henderson lines up on the far right side on a 3rd and goal from the three yard line. The receiver takes a quick false step inside, then gets his hands up while darting outside near the back of the end zone. #1 tracks the ball in the air, shields the DB from the ball, times his jump while spinning away, and snares the pigskin as he places both feet in bounds for the score!

Lined up just behind the QB in the shotgun, Henderson gets sent in motion to the flats before the ball gets snapped. The free safety comes flying up the field into the flats as the DE also notices the receiver and closes on him. #1 makes the FS miss wide and the defensive end over pursues while Henderson cuts the play back inside. The athletic wide out reads his blocks while avoiding arm tackles and keeping good balance through the trash while seeing the entire field darting right. He turns on the jets in the open, hurdles over a diving defender, and finally gets brought down at the opponent’s 9 yard line.

Henderson is an explosive, exciting playmaker in the open field. Louisiana Tech didn’t exactly play a murder’s row of college powerhouses so his statistics are a bit on the inflated side. #1 has quickness and good acceleration that make him a dangerous returner and possibly a strong WR3 or better at the next level. He didn’t see much press coverage and only runs a few routes, so there is plenty of work to do. Depending on the result of Martavis Bryant’s reinstatement, Henderson might be worth the investment if he can reach the Steelers’ second third round pick.