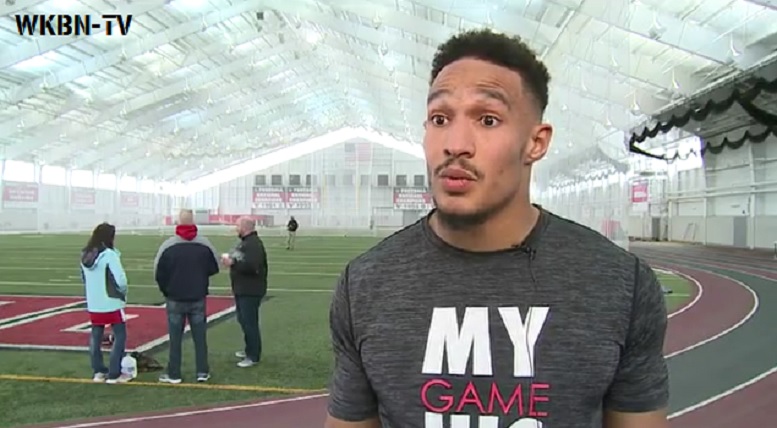 Not only was Steelers linebackers coach Joey Porter present for the Youngstown State pro day on Tuesday, Chad Krispinsky of WKBN-TV reports that the team had multiple scouts there as well and it appears as though Dan Colbert was one of them.

Rivers smartly indicated Tuesday that he would be more than fine if the Steelers took him in the draft.

“It would be cool just because I would be an hour away from them from Youngstown,” Rivers said. “I would be able to come back to games and check on the younger guys that are here. I mean I’d be getting coached by Joey Porter, one of the best to ever do it. It would be an awesome experience. Their whole coaching staff is just laid back, relaxed, chill, and cool, so that’s awesome.”

With his pro day now behind him, Rivers is probably lining up his pre-draft visits with NFL teams and one can easily speculate he’ll be making a trip to Pittsburgh in the coming weeks.

In his latest mock draft, Daniel Jeremiah of the NFL Network doesn’t have Rivers being selected in the first round and in his latest top-50 rankings he also omitted the small school edge-rusher, who had 37.5 sacks in 49 games played in.

The Steelers are certainly expected to select an edge-rusher within the first two rounds of the 2017 NFL Draft and Rivers would probably look good in the black and gold. He measured in at 6035, 248-pounds at the scouting combine last month and registered a 40-yard-dash time of 4.61-seconds, which was the fourth fastest this year in the defensive linemen group. His 30 reps on the bench was also fourth-best and his 6.94-second three-cone time was third-best.

The reaction from the crowd says it all….