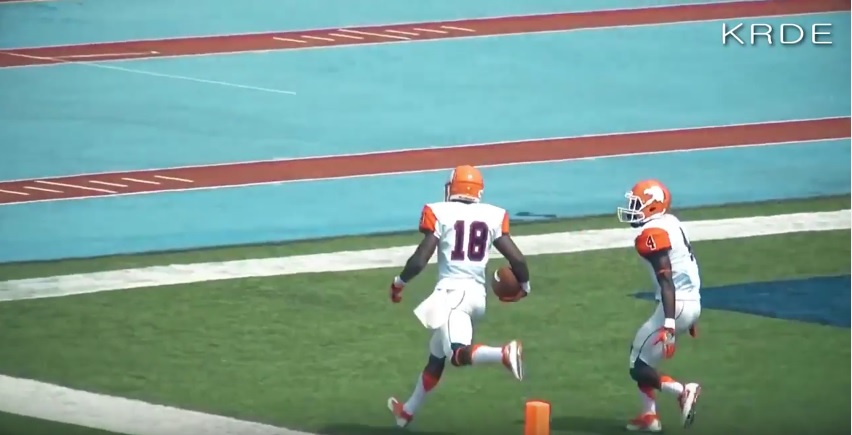 We all know John Ross ran a 4.22 and had he been wearing the right pair of cleats, would be chilling on his own island right now. But a small-school prospect ran a 4.22 at Tennessee’s Pro Day. And Mike Tomlin took notice.

Carson-Newman’s Kevin Snead ran a reported 4.22/4.26 hand times at the workout. He jumped 37.5 inches in the vert and 10’11” in the broad, all according to Yahoo’s Eric Edholm. Tomlin asked to see Snead get work in return drills after his other work.

Per Edholm, the US Track & Field/Cross Country Coaches Association of America named him college football’s fastest man in 2016. His 10.21 100 meter dash was far and away the best time, beating second place Adoree’ Jackson, a potential Day One pick, by more than a full tenth of a second.

He briefly saw the field in 2015 but made an impact last year, catching five passes for 151 yards and one touchdown. He split time as the team’s kick returner, averaging 24.6 yards on 17 returns with a 90 yard touchdown.

It’s no surprise that Snead ran track at Carson-Newman, rewriting the school’s record books. The Standard Banner has a nice feature piece on his backstory you should check out.

He reminds me of Wendall Williams, who ran a 4.19 at the Regional Combine last year and ended up sticking with the Houston Texans.

I’m the last guy to post a highlight reel but since he’s such an unknown, here’s a video of assorted clips from what appears to be high school, Carson-Newman, and his track days. Fair warning, some salty language so don’t have the volume on if you’re at work/have a small child/are a small child.