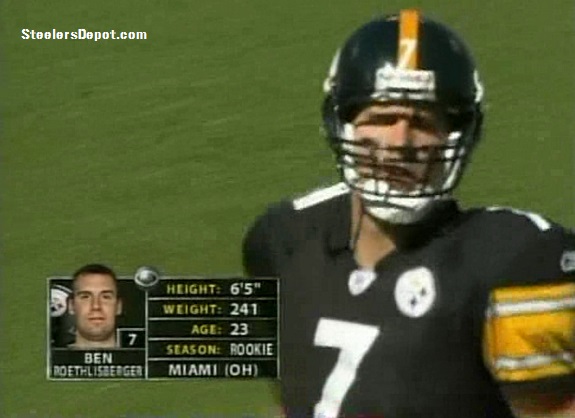 And now, those 2004 teams are looking to win the lottery again. The Pittsburgh Steelers have been blunt in their desire to find the next Ben Roethlisberger, showing heavy interest in some of the top quarterbacks in this year’s draft. But they aren’t the only ones.

The New York Giants and San Diego Chargers, with Eli Manning and Philip Rivers respectively, are apparently doing the same.

“I think we do have to get a young quarterback on campus.  We need to start developing someone because we have two veteran quarterbacks, and both of them are long in the tooth.  I think they have some good years left in them; don’t get me wrong.  But you have to start thinking about down the line, too…I would love for a young quarterback to get in here and learn from Philip. Philip is the ultimate pro in my opinion.  We have a good situation for a young quarterback that doesn’t have to come in and play right now.  He can sit, watch and learn.”

Rivers doesn’t have the hardware the other two do but on an individual level, he’s enjoyed nearly as much success as Roethlisberger and arguably more than Manning. But he just turned 35 in December and though he hasn’t missed a game basically ever, he’s played through several severe injuries.

The Giants have a similar thought though maybe a slightly less urgent-sounding approach. Here’s what owner John Mara said via SportsNet New York.

“I think you always have to look at drafting a quarterback where you can. Our philosophy going into the draft — at least mine — is just take the best player. It doesn’t matter what position he is. I think if there’s a chance to take a quarterback — it doesn’t have to be this year — then you should take him.”

Manning turned 36 at the turn of the year and though he rebounded from a rough patch earlier this decade, he’s shown signs of regression and struggled in Ben McAdoo’s offense last year.

Every team would love to have a Favre-to-Rodgers transition, though when asked about that yesterday, Mike Tomlin said he wouldn’t take his cues from any other team. But that’s ideal albeit difficult to do.

Of course, if the biggest price to pay for hitting on a franchise QB is having to find another one every 13 years, it’s hard to complain. And for Pittsburgh, there’s a bit of company in that misery of doing so.