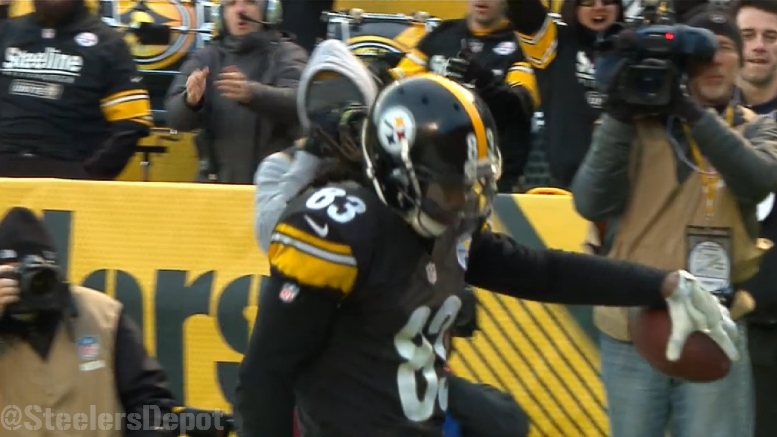 Cobi Hamilton didn’t even break camp with the Steelers, and yet he was catching touchdowns for them late in the season. Granted, the opportunity for that to occur was created due to injuries in front of him, but credit is due for taking advantage of a chance when it presents itself.

Originally a late-round pick of the Bengals a few years ago, Hamilton failed to stick on any roster for years despite having plus size and speed. His was most recently with the Panthers in the summer when he was cut, and the Steelers brought him in several days later.

The scrappy wide receiver showed the coaching staff enough to justify keeping him on the practice squad early in the season, and when injuries became a concern, he was the first one that they promoted, over one of their own draft picks, although he ended up on the 53-man roster by the end of the season as well.

He caught a touchdown in his first game of action, albeit a late one in garbage time with the Steelers trailing by an insurmountable deficit. Still, he showed skills on his two receptions on the drive. He began to see more playing time as the season advanced.

There was a good stretch of the season, in fact, where Hamilton was more or less functioning as one of the Steelers’ three starting wide receivers. They valued his ability and willingness to block, which became critical when Darrius Heyward-Bey was injured.

Of course, he is not without his problems, and we saw a whole bunch of them in the AFC Championship game. Though he came up with a late touchdown, he also dropped an early one, and caught another one illegally. But he’ll always have the game-winning touchdown in overtime in the regular season finale against the 1-15 Browns.

Hamilton was one of the first exclusive rights free agents that the Steelers were quick to get back under contract, and this for some reason chagrined a certain selection of the fan base—no doubt because they don’t realize how cheap and non-guaranteed an exclusive rights contract is, or that you need 90 players on your offseason roster anyway.

His continued presence in the organization does not in any way guarantee that he will be on the team’s 53-man roster in 2017, but it is certainly a possibility. At worst, he would make the practice squad again—assuming that he doesn’t draw enough interest to be claimed by another team, which, frankly, he should.