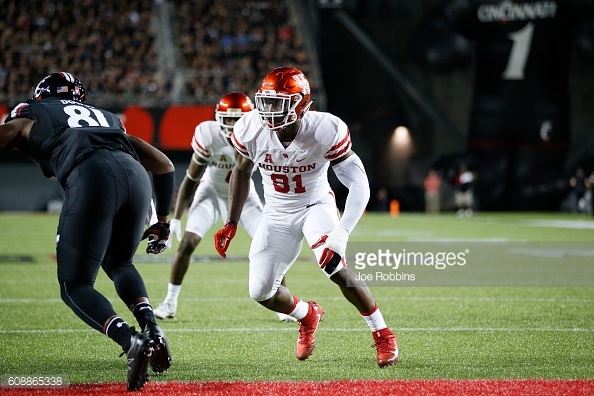 Another new name thrown into the first round conversation for the Pittsburgh Steelers and whadda know, it’s another outside linebacker. Sporting News’ Eric Galko unveiled his mock draft today and has the Steelers selecting Houston OLB Tyus Bowser with the 30th overall pick.

“Bowser is set to be one of the biggest risers in the draft process, so get to know him now. He can fit a 3-4 or a 4-3 defense and is a worthwhile first-round prospect. The Steelers need to find a viable James Harrison replacement.”

Galko and other scouts have quietly been talking Bowser up over the past few weeks as someone whose stock is “rising,” meaning, the media is catching up to what scouts actually think of him.

Though the name might feel foreign and too much of a reach, it has logic to it. Bowser’s usage is similar to Bud Dupree’s and he’s less of a projection than most of these other guys. Check out my whole profile on Bowser here, we’ll link it at the bottom too, but here’s what I wrote comparing him to Dupree.

And heck, Dupree is probably going to be considered even more raw than Boswer since Kentucky didn’t really have the coaching staff to support and teach him like they have in the NFL. Bowser makes a lot of sense.

He isn’t a natural pass rusher and I don’t think he’s quite the athlete Dupree is but offers a well-rounded game and can make an immediate impact in the Steelers’ defense. It should be abundantly clear at this point. There is no shortage of OLB prospects for Kevin Colbert and company when it’s their time to turn the card in.