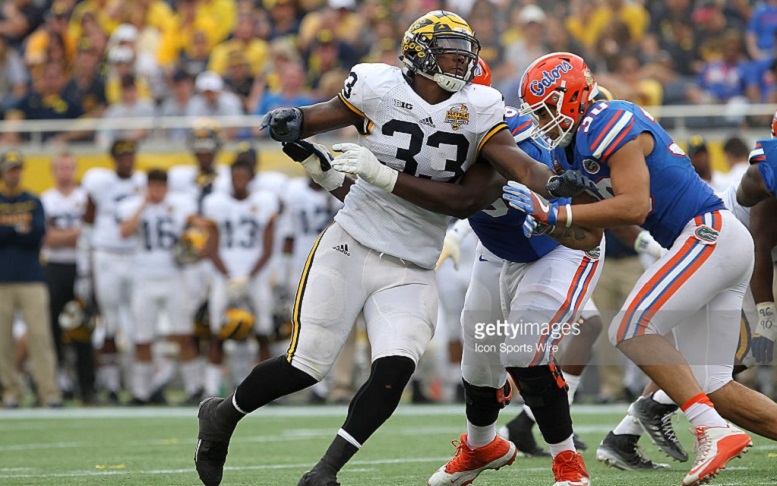 Chad Reuter of the NFL Network is a glutton for punishment as he has now released a full five-round mock draft that includes 184 selections.

When it comes to the Pittsburgh Steelers, Reuter has them selecting Michigan edge-rusher Taco Charlton 30th overall in the first round and he writes:

Charlton’s agility would allow him to succeed outside for Pittsburgh.

The Steelers obviously have some elevated interest in Charlton as both general manager Kevin Colbert and head coach Mike Tomlin recently attended the Michigan pro day and even met with edge-rusher the night before the event took place.

Charlton, who measured in at this year’s scouting combine at 6055, 277-pounds with 34 ¼ inch arms, recorded 18.5 total sacks during his college career.

In the second round of his latest mock, Reuter has the Steelers once again selecting a Michigan product and this time it’s defensive lineman Chris Wormley, who like Charlton dined with the Steelers prior to his pro day.

Wormley, who measured in at Indianapolis at 6050, 298-pounds with 34 1/8 inch arms, recorded 12 total sacks during his career at Michigan as part of the 83 total tackles that he made.

Kazee, who measured in at the combine at 5102, 184-pounds, ran the 40 yard-dash in 4.54 seconds and posted a 34-inch vertical jump. The cornerback had 239 total tackles during his college career in addition to 30 pass breakups and 17 interceptions.

In the fourth round of his mega-mock, Reuter has the Steelers selecting South Florida running back Marlon Mack. The Steelers sent running backs coach James Saxon to the South Florida pro day a few weeks ago to get a closer look at Mack, who rushed for 3,609 yards and 32 touchdowns on 586 carries during his college career. Mack, by the way, measured in at 5113, 213-pounds at the combine and ran the 40-yard-dash in 4.50 seconds.

In the fifth and final round of his latest mock, Reuter has the Steelers selecting Pittsburgh edge-rusher Ejuan Price 173rd overall.