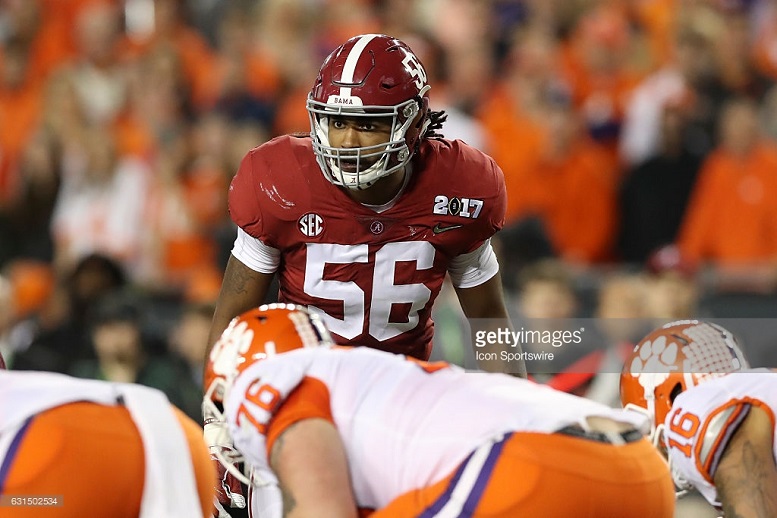 Circling back to this mock draft from Fox Sports earlier in the week that went into the second round of their mock with some interesting choices for the Pittsburgh Steelers.

At pick 30, Dieter Kurtenbach has the Steelers picking up Alabama OLB Tim Williams. In a deep edge class, Williams’ name hasn’t been tossed around in the first round anymore, overshadowed by names like Derek Rivers, Jordan Willis, and Tyus Bowser. But here, Williams is the man and here’s Kurtenbach’s explanation.

“Williams’ draft stock has already taken a hit, as possible off-the-field issues have been gossiped about this winter. The Steelers might be wary, like the other teams that passed on him, but this kind of pass-rushing talent is going to be critical for the Steelers in 2017 and beyond.”

Kurtenbach acknowledges Williams’ concerned, he didn’t have a great combine and has a history of drug issues/concerns, making this pick surprising. But it fits a need so hey, I get it.

His next selection is a little more head scratching. He was Pittsburgh taking Air Force WR Jalen Robinette in the second round with this brief explanation.

“A clean and effective possession receiver — exactly what the Steelers need.”

Two issues. Position and value. I get the Steelers taking a wide receiver, I’ve advocated to do so late in the draft. But Robinette doesn’t profile as that with his poor measurables, running a 4.62 40 and jumping 31.5 inches in the vertical. It’s too early to take one, especially another Z type receiver (the Steelers have four of those on the roster already), and Robinette’s value is much, much lower than the second round.

NFL Draft Scout ranks him as the 56th best receiver, currently without a draftable grade. NFL.com is a little more generous but not nearly enough to justify a second round investment, grading him tied as the 22nd best receiver in this class.

Kurtenbach’s right that Robinette is a clean prospect with his Air Force background and he has massive hands that make him a possession, Z-type, but this move makes little sense on basically every level.

Skimming through the rest of the mock, and I get they’re difficult and no one is going to agree on everything, but Haason Reddick is somehow lasting until pick 56, John Ross at 38, and Sidney Jones – post Achilles injury – still taken in the first round, going 24th overall. I looked at all that after writing all this so yeah….this might have been one to avoid.