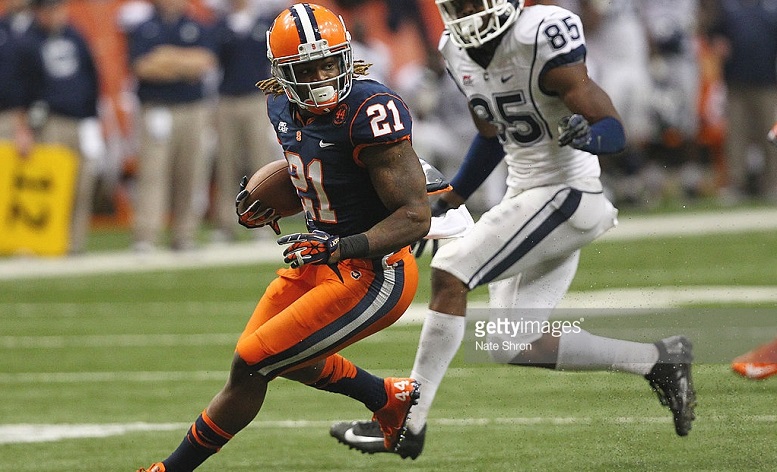 Though the last snap of the 2016 NFL Season has been played, the 24/7 – 365 nature of the National Football League rolls on. It is at this time of year that the game moves from the field to the conference rooms of team facilities as scouts everywhere craft their final evaluations on a number of prospects. In the cross-hairs of a multitude of scouts, these prospects are given no chance to fire back – that is until now. The following series of player profiles will be dedicated to giving a former prospect an opportunity to evaluate their evaluators based on their performance on the field.

When news broke that the Pittsburgh Steelers had traded up in the 2013 NFL Draft to select safety Shamarko Thomas, many had come to believe that the team had found their eventual successor to in the box safety Troy Polamalu.  Even Mike Mayock was a believer in the pick, stating on air, “I love this kid. You talk about Steelers picking tough guys. This guy reminds me of Bob Sanders. He’s undersized but plays like a human missile.” Now four years later, Thomas is an unrestricted free agent and far from any comparison to Polamalu or Sanders. With just two career starts and zero interceptions, Thomas finds himself at the bottom of the NFL totem pole and in search of a career rejuvenation.

Approaching the 2013 NFL Draft, all the chips seemed to be falling into place for Thomas. The Syracuse products’ favorable reviews only gained more traction after a remarkable showing at the 2013 NFL Combine in which the safety posted numbers that ranked tops of his class. While Thomas earned top performer honors for his 4.42 40-yard dash time and 11’1” broad jump earned him, it was the safety’s bench press performance that really caught the attention of those in attendance.

Since the 2013 Combine, no defensive back has eclipsed Thomas’ effort of 28 reps on the bench press. Thomas’s strong showing on the bench press re-assured scout’s intrigue with Thomas’ ability to be in physical in the box strong safety.

A passage of Thomas’ NFL pre-draft profile re-affirms this, stating “Tough safety with a linebacker’s mentality and good thickness throughout his frame. Used around the line throughout his career, but also possesses the closing speed to make plays from a two-deep look.”

Many in the scouting industry including the Steelers, felt that Thomas had the right combination of physical traits and on field production to translate into an NFL caliber strong safety.

“Though his lack of height is not ideal for a pro defensive back, his coverage skills and ability to support against the run make him a potential starting strong safety who is likely to be selected in the middle rounds,” reads another passage from the same NFL pre-draft profile.

Though the NFL profile is currently 0-2 on Thomas’ projection at the next level, the profile did hit a home run on one prediction stating that “Aggressiveness and speed should make him (Thomas) an outstanding special teams coverage player early in his career.”

In Thomas’ case, the pre-draft grade on him is right for all the wrong reasons. After the retirement of Polamalu, Thomas twice lost his early head start on the starting safety position, first to veteran Will Allen and then to special teams’ captain Robert Golden. It was not that Thomas found himself outplayed by his competitors as much that his mental grip of the defense left him a liability on the field. As a result, Thomas found himself a special teams mainstay and seemed to be making strides last season before a concussion ended his year.

Now 26, Thomas is attempting to re-write the narrative on his pre-draft grade. A change of scenery may be the best outcome for Thomas as the once coveted safety tries to prove that while special teams play has shaped the earlier portion of his career, he still has a lot more to offer if given the chance.