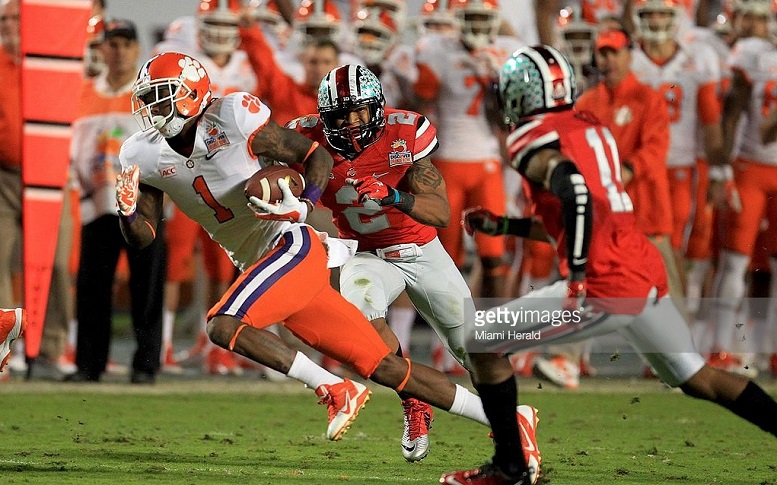 Perhaps one of the most polarizing Pittsburgh Steelers selections of General Manager Kevin Colbert’s tenure, the selection of Clemson receiver Martavis Bryant has the traditional making of a calculated risk but with a twist. For a player like Bryant, who is athletically gifted and has drawn comparisons to Randy Moss, slipping into the fourth round seemed impossible, unless of course, there were non-football reasons involved. And for Bryant, it seemed that there were some off field rumblings following him.

While the public now knows of Bryant’s past issues, not much was put out prior to his selection in the 2014 NFL Draft. Besides a brief mention of immaturity by Mike Mayock on Bryant’s pre-draft profile on the NFL webpage, a specific red flag on Bryant is hard to locate. In fact, the only hit of Bryant’s potential red flags is an Inside Pittsburgh Sports page that had this to say,

“One college evaluator who scouts the SEC and ACC said this about Bryant. Huge upside as a vertical threat……. Did some idiotic stuff in college. Really needs coached up, have some guidance on what it takes to be a pro…. Chance to be a good one.”

It seems that while NFL teams may have been in the know about Bryant’s issues at the time, the information did not spread much farther than that. And while these issues leaked into Bryant’s NFL career, the former Clemson receiver has bettered himself in the process, reminding the world why he drew comparisons to some of the all-time greats.

Slotted behind Sammy Watkins at Clemson, it was not Bryant’s numbers that drew a comparison to Moss but his natural athleticism and size. Standing at 6’4” and 211-pounds with great speed, wide receiver coaches around the league drooled at the prospect of coaching up Bryant. The love for Bryant’s measurables extend well into his on-field production, as his NFL.com draft profile leads us to other intangibles that the Steelers brass has gotten to witness first hand.

“Excellent body length with a long, rangy frame. Very good straight-line, separation speed. Can drop his hips surprisingly well for as tall as he is and is fairly shifty after the catch.” Bryant’s athleticism poised as a nightmare for opposing defenses, gaining more than 20 yards on 18 of his total 76 receptions.

Opposing defenses may have had the chance to catch their breath against the Steelers offense last season, a season in which Bryant missed due to suspension but they better be able to adjust fast in 2017. If NFL Commissioner Roger Goodell accepts Bryant’s reinstatement plea this offseason, the Steelers offense will get back the deep threat they consistently lacked next season.

If all goes as planned for Bryant, the Steelers will welcome the talented receiver back, putting one more chip in the basket for their confidence in Bryant’s abilities that swept them away just three years ago.