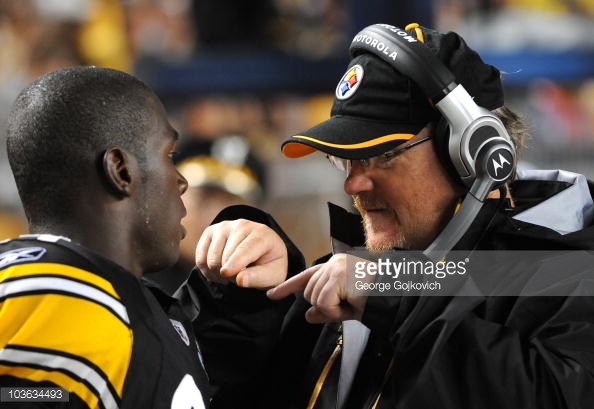 It’s a natural part of the human condition to do some reflecting on your past when you reach milestones in your life, either personally or professionally. When Pittsburgh Steelers wide receiver Antonio Brown reached a new contract extension that made him the highest-paid player in the NFL at his position, I would say that that constituted a career milestone, and one that he has been waiting on for a couple of years.

That is no doubt why he found himself reminiscing about his entrance into the league during the draft process when he took to Twitter on Monday night. “6th round”, he Tweeted. “195th overall”, which was his order in the total number of players drafted in 2010. “I’m still hungry. Just watch !!”

The building block of the Tweet was a photo of a draft preview scouting report, highlighting the negatives ascribed to him coming out of CMU as an underclassman. He captioned the “draft preview” with “never let someone else [sic] words dictate your future”. You can read the scouting report’s negatives below:

Very thin and small in stature with a wiry build. Lacks functional strength to be the jam and will struggle to create separation against man coverage. Raw route runner—does not sell routes or show a feel for navigating zones. Concentration lapses show up too frequently. Has a prima donna attitude and does not like to work. Did not play quality competition on a weekly basis. Underpowered blocker. Attitude and work ethic are concerns.

A number of these claims might sound ridiculous in hindsight, but no doubt were closer to the truth seven years ago. Brown did have quite a wiry build coming out as an underclassman and had some growing, physically, to do, not to mention mentally.

Some things are still true, it could be argued. He does exhibit prima donna tendencies and is an underpowered blocker, but he has become one of the game’s elite route runners and questions about his work ethic are met with laughter today.

Brown came into this league with talent—he scored on his first touch and made NFL history in his second season by becoming the first player to ever record 1000 receiving yards and 1000 yards in the return game in the same year—but he worked hard to transform himself into the person and the player that he is today.

“We all make mistakes”, he said of the author of the scouting report when asked about it during an interview on NFL Network, though the reality is that he could also be talking about himself. “We’ve got to learn from them and get better from them”.

Rare are the instances of an individual stepping into a new phase of their lives as a finished product. This applies well to the NFL, where it’s quite difficult to make an impact as a rookie. Brown is an exemplary demonstration of the sort of success that can be achieved if you strive to build from your weaknesses and remain motivated.