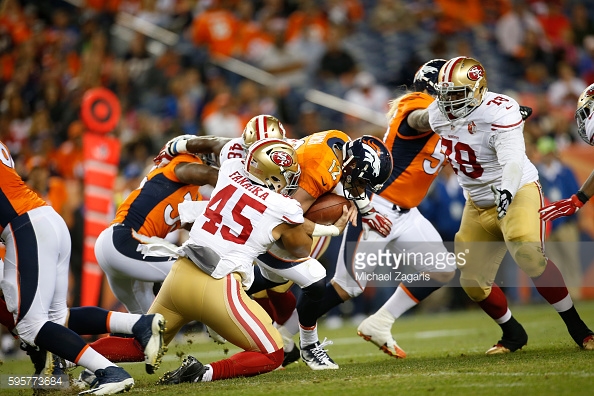 Next up is outside linebacker Jason Fanaika.

I’ll be honest. Fanaika’s resume doesn’t look great on paper. His college production would be considered only average and his workout numbers left even more question marks. But Fanaika has the size, strength, and work ethic to, at the worst, make the room he’s in much more competitive.

Over two years at Utah, he recorded 20 TFL, 9 sacks, and three forced fumbles. The numbers may not be gaudy but Fanaika was considered a top player on the Utes’ defense and one of the best pass rushers in his conference. And easily, one of the strongest. Right before the 2015 season, with teammates competing against each other, Fanaika blew away everyone with his brute strength.

He squatted 830 pounds, 30 more than anyone else, including the entire offensive line. His max bench was 495 pounds, ten pounds heavier than nose tackle Stevie Tu’ikolovatu, draft eligible this year at a whopping 331 pounds. So strength certainly isn’t a question.

But athleticism? Ehh…it’s up for debate. At the 2016 NFL Combine, he ran a 4.92 with a 1.67 ten split, neither number inspiring much confidence. It’s important to point out, however, his three cone number was strong, turning in a 7.06, a much better time than a guy like Bud Dupree (7.52) at a similar weight.

The Salt Lake Tribune has a great feature story on Fanaika. It was a career that took several turns. He started at Utah State, not Utah, and totaled five starts in the 2010 and 2011 seasons. He took a mission trip but left early when his dad was diagnosed with colon cancer. It put the burden on Fanaika to support his large family, seven siblings in total. During that time, he sold steel in a warehouse, worked at a security company, and a credit consultant. Maybe it’s only appropiate for him to be playing in the place affectionately called the Steel City, even if any Pittsburgher knows the city has transformed itself to anything but.

After taking classes at a JUCO, he was eligible to join Utah’s program, redshirted in 2013 and started the final two years.

Since entering the NFL, he’s bounced around the league. Picked up as a UDFA by the San Francisco 49ers, he’s spent time on the Oakland Raiders and Washington Redskins’ practice squads.

The Steelers certainly are starving for fresh faces at outside linebacker, both good and bad news for a guy like him. Good news because, obviously, maybe he could be that guy. But bad news because the team is expected to bring in a whole host of talent in the draft with their selections and UDFAs. Drafting two EDGE rushers could push Arthur Moats out of a roster spot and scrape away at whatever odds Fanaika had.

But the practice squad is still in play for him and hopefully, he can at least show himself to be a physical player against the run in camp.