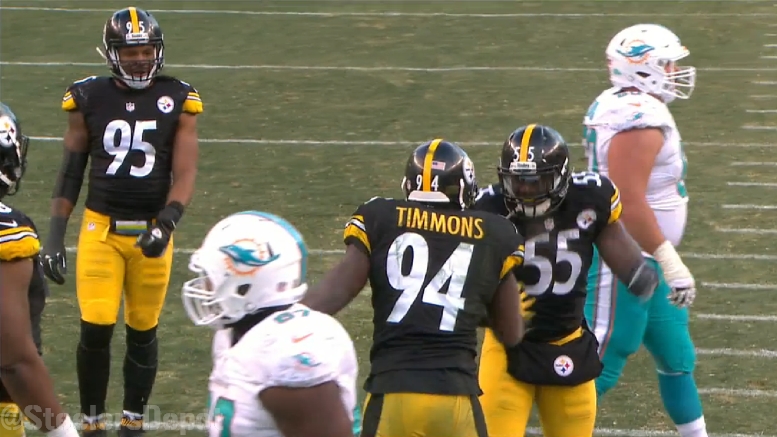 Question: What position group on the Steelers’ roster has failed to improve or regressed the most from around this time last year?

You probably figured this was coming based on yesterday’s question, but it’s time to address the flip side of the coin. Yesterday I asked you which position group on the Steelers’ roster you felt saw the most improvement, pre-draft, from this time last year to now. I felt that the cornerback position group was a leading candidate, and many agreed, while the defensive line was also a noted topic.

Now, on the other hand, which position group has seen the least improvement, or regressed the most since about a year ago? I think the place to start looking for the answer is to look at the players lost, and the obviously most significant component of that equation is Lawrence Timmons, the only true starter the team has lost.

The only players that the team added to the inside linebacker position last season were Tyler Matakevich in the draft and Steven Johnson in free agency, neither of which, at least currently, are anything more than marginal defensive players, though they are key contributors on special teams, but when evaluating position groups we are mainly weighing their contributions to their natural position.

The Steelers have a succession plan in place for Timmons with Vince Williams, but not only is Williams expected to be a downgrade, the promotion also hinders the quality depth, which is why I feel this is the most reasonable answer.

One can also make a case for the running back and tight end positions. DeAngelo Williams appears to be out of the equation for now, and with mounting injuries to boot. Le’Veon Bell has yet another injury on his resume as well.

As for tight end, Ladarius Green was supposed to be a major boon, and was a major free agent splash for the Steelers. Currently, it’s not clear for absolute certain if he’ll ever play again. So this is a position in which they may not technically have ‘the starter’.