– Great burst and gets up to speed in an instant
– Takes good angles to the football, high football IQ, and gives him sideline to sideline range
– Quick to read and diagnose, understands blocking schemes and how runs develop
– Versatile, true Swiss Army Knife, played all over on defense, used as a running back/wide receiver, and kick/punt returner
– Works hard to stay clean in the run game, uses his hands to shed blocks, and shows vision to the football
– Great feet as a return man, shows burst and long speed with enough power to make it tough to bring him down with poor tackling technique
– Wins in press coverage over tight ends, size and strength to jam at the line
– High motor and effort player who chases the ball past the line of scrimmage

– True tweener, no defined position in the NFL and each team will look/value him differently
– Lacks size and frame to be a true linebacker and didn’t spend much time in a deep safety role
– Wasn’t a playmaker and didn’t make enough splash plays in his career, disappeared too often and didn’t create enough without scheme aiding him
– Doesn’t show enough tape to feel confident for him in space and in off coverage

This happens with a couple players each year in my profile. A lot more good traits listed than bad but the bad is weighted heavier in my mind than the good. We’ll get to what I’m concerned about with Peppers later. To the good.

There’s no question he’s a playmaker with the ball in his hands. He didn’t touch the ball a lot on offense but he found the end zone once every nine carries in his career. Peppers is explosive with great top end speed and should turn in a strong time in the 40, especially with his track background and knowledge of getting into a sprinter’s stance. That’s second nature to him.

Out of Wildcat against Rutgers, Peppers takes the direct snap and outruns the safety to the edge, bursting upfield and nearly scoring. He did get taken down at the very end but these are the big plays I think he’s capable of in the NFL.

He’ll show it in the return game too posting big career numbers as a kick and punt returner. Peppers has great feet and ability to change directions with the size and speed to make him a threat in the open field. You see his time as a running back in high school kick in at Michigan.

On defense, I see the same. A tiny bit at least. He supports the run with physicality, works hard to stay clean and best of all, has a strong football IQ and understands how blocking schemes develop.

Against Hawaii, at his box safety spot, he reads the pin/pull scheme, rolls down to become the force player and beats the puller to the spot and still blows the run up, making the tackle.

He lined up everywhere at Michigan. As a box safety/linebacker… 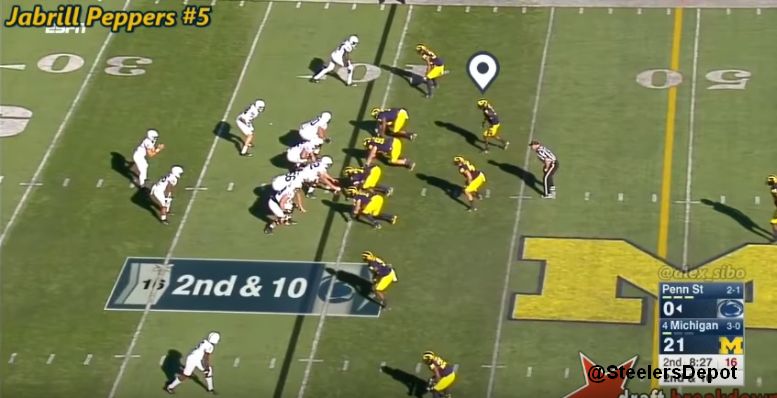 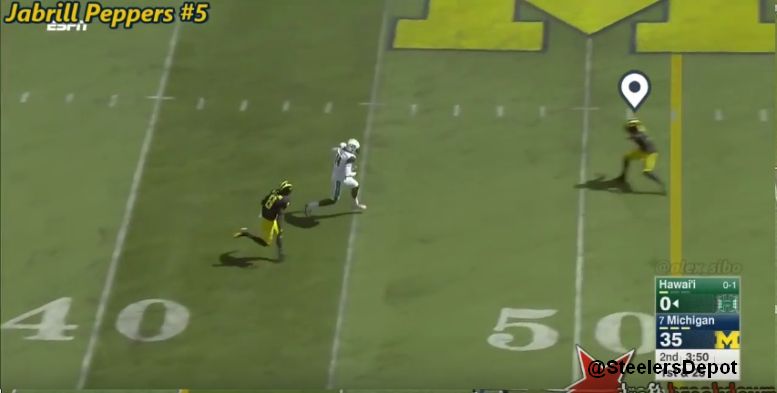 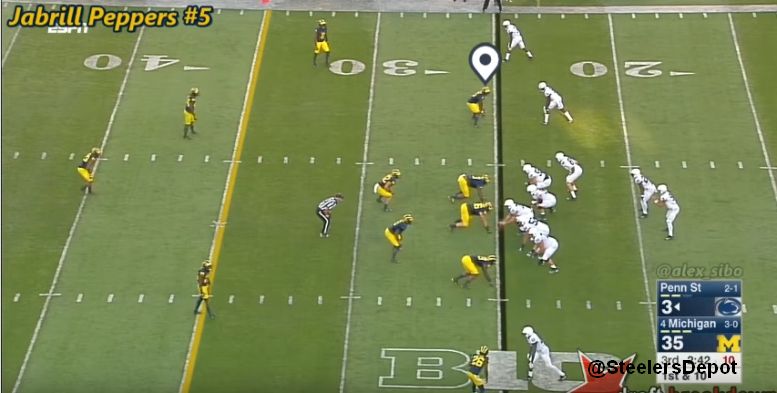 All in combination with his work on offense and in the return game. He’s not going to be able to do all that in the NFL and it is important – and tricky – to define his NFL role.

Which brings us to one of the problems with him. Where does he fit? Different people will have different responses. His frame just isn’t big enough to be a full-time linebacker, he’s a lot smaller than even Ryan Shazier or someone like Telvin Smith out in Jacksonville.

And I don’t know if he’s a true cover safety either. One career pick, no pass breakups his junior season. Not a lot of tape backs it up. He can press and jam  TE at the line but can he play the deep half in Cover 2? It’d be a work in progress, to say the least.

If you’re going to play him on defense, he’s going to be one of those hybrid guys. There’s nothing inherently wrong that except for the knowledge playtime will be a bit limited. Kansas City’s Daniel Sorensen played 48% of the time in 2016.

Again though, I just don’t see a playmaker. Even against lower competition, he struggled to consistently make his presence felt. Defensively, he was quiet against Rutgers, a team Michigan destroyed 78-0. I intentionally put on that tape just begging to see him go bonkers. Didn’t happen. He had a couple nice plays against Hawaii but it just isn’t enough for me. It’s not even like he’s a cornerback and teams are staying away from him. He played in the box in a great system under Don Brown and his impact was still just average

If it were me, I’d make him a gadget guy on offense. That’s when he is his most explosive and impactful. He’s a playmaker with the ball in his hands and in the return game, hearkening back to his track and running back days. The NFL is all about making plays, especially if we’re talking about a first round candidate. That’s where he wins, that’s where I’d play him. It’d be limited usage but the production per snap if worth it (like Tyreek Hill).

In all, no matter how you want to use him, I don’t think it adds up to first round pick. And definitely not if he’s a hybrid guy on defense.

Games Watched: vs Hawaii, vs Wisconsin, at Rutgers, vs Penn State, at Iowa