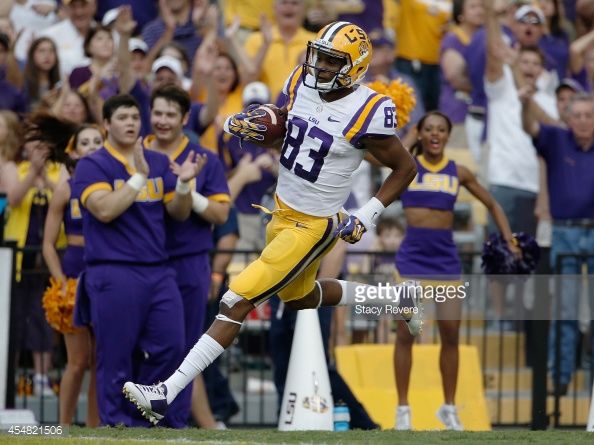 Back at it for Day Two of the Combine. It’ll be a long day with the receivers, tight ends, and quarterbacks all showing off. Let’s break down what to keep an eye out on.

– Josh Dobbs is an athletic quarterback who can make plays outside of the pocket. But I want to see what he can do stationary in the pocket like he’ll still have to do 75% of the time in the NFL. There is some intrigue and upside with him though consistency has been fleeting.

– Ditto with Jerod Evans. Pretty green kid, just one year of big-time college experience. How much do teams know about him? Spent three years at JUCO so it’s as if they’re starting with a blank slate, figuring out this guy’s past, how he learns, what coaches/teammates think of him. Super interested in watching him rip it.

– Mitch Leidner was king of the world…then he wasn’t. At one time, a guy people thought was a 1st round pick is now an afterthought. Still, I don’t want to count him out. 2016 was a disaster, eight touchdowns to 12 picks, so this is a reset point and a time to put out some good press.

– Patrick Mahomes should be fun to watch, even if he isn’t going to improv the way he did on a weekly basis at Texas Tech. Might have the best arm there and this time, he’ll be throwing from a sound base. His footwork has been called into question and let’s see if he can show the technical side of things in addition to his backyard football mentality.

– Whew, this is a strong group of players. Lot of hyper athletes out there. Miami’s David Njoku is the headliner who has posted some unreal measurables. 6’4 246 with 35 1/4 inch arms, 10 inch hands, and 21 reps on the bar, an excellent number for how long he is. He should test very well and be right behind OJ Howard as the top tight end in the draft. For some teams, who want more of a natural receiver, he could even be ahead of Howard.

– Gerald Everett and Evan Engram should also do well. Hoping Everett catches everything clean and does well in the gauntlet drill to help downplay the focus on his small hands. If he catches the ball clean here and his tape shows the ability to catch in traffic, there should’t be an issue.

– Want to see Jordan Leggett work the underneath part of the route tree. He’ll look good vertically, that’s where he wins the most, but he does struggle out of his breaks in the short/intermediate game, drifting out of his cuts and not bursting away. Don’t have a great feel for what he’ll time either. Interested to find out.

– Adam Shaheen…the man everyone is anxious to see on the same playing field as the D-I boys. Don’t expect him to run in the 4.5’s like an Njoku or Howard but keep in mind he’s the heaviest tight end there, tipping the scales at 278. A 40 time in the low to mid 4.7’s would be really good for his size. And getting to see him catch the ball in space will give us a good idea of what kind of athlete he is. Can he run the corner route with fluidity?

– FIU’s Jonnu Smith could be a sleeper. A good athlete who caught 178 passes in his college career. At 6’3 248, he is sort of a tweener though. Little short to be an in-line guy. Again, the 40 time will be important.

– I have heard Billy Brown was protesting the move to tight end but he’s stayed big, weighing in at 254 at the Shrine Game and 255 at Indy. Listed as a receiver, he’s going to be viewed as a tight end and I can’t figure out why he isn’t with that group. He’s a small school kid from Shepherd and I barely know anything about him so the Combine is a good place to start.

– LSU’s Travin Dural is an interesting case study. In his first two years as a major contributor, he averaged 19 and 20 yards per catch. Last year, that number dropped off to just 10. Maybe blame it on the offense or a small sample size, just 28 catches last year, 100 in his career, so pay close attention to his 40 time. I’m confident he’ll look good catching the ball in drills but his overall athleticism? I don’t have a good read.

– Hoping for a bounce back week from Syracuse WR Amba Etta-Tawo. Had a rough week at the Senior Bowl, perhaps in part due to a reported broken finger. Hopefully that won’t affect his 40 time the way it did Demarcus Ayers last year.

– Carlos Henderson seems to be more well-liked from your local bloggers than big media. Might settle that score today. Henderson is great after the catch. Won’t get to show that in drills but it’ll be evident in the agility drills. Should be one of the top guys in the short shuttle and three cone.

– I haven’t watched a lick on Cal’s Chad Hansen but some people think he’s the third best receiver in this year’s class. One year production, catching 92 passes for 1249 yards and 11 scores.

– Think Zay Jones will be considered a top 5 WR by most people after Indy. One of the smoothest route runners who can sink his hips and runs crisp routes. Big catch radius and makes some difficult catches. If he runs pretty well, he’s an early Day Two pick and, even though I think I rejected the notion two weeks ago, possibly in play for a late first round selection.

– Want to get a feel for what Jalen Robinette’s top speed is. Averaged 24+ yards per catch the last two years at Air Force. But is that a product of the offense or Robinette’s true big-play ability? He should be able to catch everything with his absurd 11 inch hands.

– Fred Ross has to show more explosiveness out of his break. Ability to maintain speed at the top of his route. Because I don’t expect him to run super well (4.52-4.55).

– Jamari Staples is as lanky as they come but he wants to run one of the Combine’s best times. Could wind up in the 4.3’s. Got concussed during the Senior Bowl so sure teams have checked him out too and see where he’s at (hopefully he can workout).

– Ryan Switzer is another guy who should do really well in the agility drills. Think he’ll put up some Julian Edeleman-type numbers (4.5 40, 3.92 short shuttle).