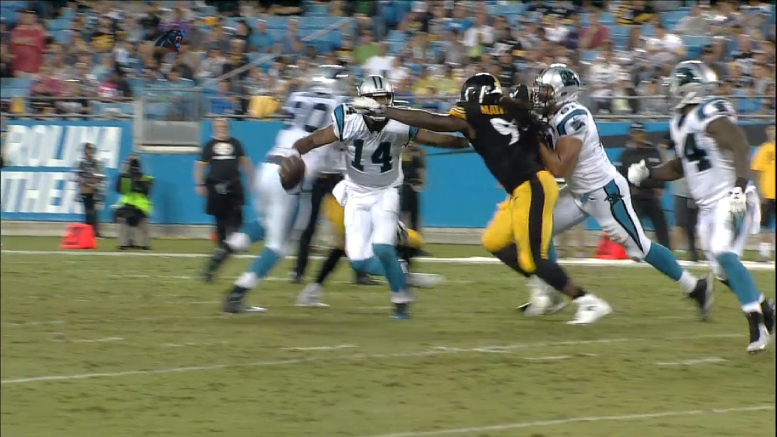 After the Steelers took a false step a few years ago in signing Cam Thomas on a two-year, $4 million contract that saw him start the first 12 games of his first season with the team, the front office was more cautious in seeking their next depth defensive linemen, settling upon Ricardo Mathews for a one-year deal at the veteran minimum salary. He didn’t even get a signing bonus.

Thomas didn’t really fit what the Steelers were looking to do from a pass-rushing perspective as they looked to actively generate more pressure from the defensive line due to their increased usage of the nickel front.

Mathews didn’t fully fit in with the traditional responsibilities of a 3-4 defensive end, either, which is why he split time with L.T. Walton late in the season when injuries forced the depth to step up and play a crucial role.

But he did at least provide a semblance of a presence against the pass, and did manage to record a sack. He technically started five games for the team last season, but I don’t believe he logged starter-quantity snaps in any five of those games, some of which he left early due to an ankle injury that hindered him late into the season and caused him to miss the first two playoff games.

Mathews was a bargain piece who more or less provided a bargain level of services for his tenure. Provided that he would return on the cheap, it’s certainly well within reason that he could be re-signed, even if lacking a guarantee for a spot on the roster.

Given in the wake of the team’s injury issues last season—they played the final two games of the regular season without either of their starting defensive ends, plus Mathews—it would be equally reasonable to suspect that they would like to seek a more stable solution to their defensive line depth, however.

Should he be re-signed, it would no doubt come after the draft, similar to the time frame during which David Johnson was re-signed a year ago. Unlike Johnson, however, he didn’t necessarily provide proof of his worth.