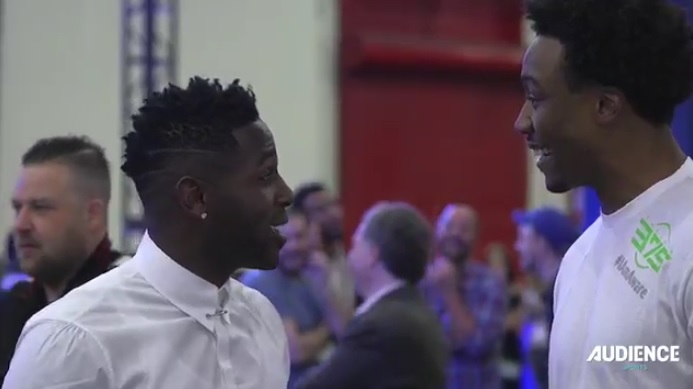 Remember the Porsche bet that New York Jets wide receiver Brandon Marshall made with Pittsburgh Steelers wide receiver Antonio Brown prior to the start of the 2016 regular season? Sure you do and you know who won that bet as well.

Well, it looks like the two have finally worked out the details of the bet and while Brown won’t be getting Marshall’s Porsche, if indeed it really was his to bet, it sounds like he might be getting the key to it as a consolation prize.

“I don’t know if we was clear about everything,” Brown said to Marshall in the video below.

Later in the video, Marshall thanks Brown for donating to his foundation. In case you missed it Marshall honored his bet with Brown by donating $100,000 to his own charity and presumably in the name of the Steelers wide receiver.

Marshall then asked Brown if he thinks quarterback Ben Roethlisberger will be back for the 2017 season.

Marshall then told Brown that if Roethlisberger does ultimately decide to retire, he’s willing to bet his house that he’ll beat the Steelers wide receiver presumably in total receiving yardage in 2017.

.@AntonioBrown came to collect the ? to the @Porsche that @BMarshall owes him… #AUDIENCESports #SB51 pic.twitter.com/tVq9zKNzzg