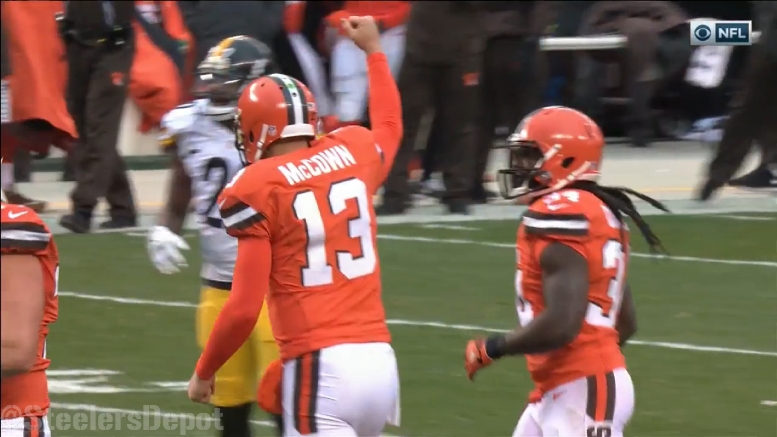 I know I’m breaking a Cardinal Sin here with the dreaded “should the Steelers go after ‘X’?” the day after a dude gets released. So please be gentle, The Internet.

But Josh McCown makes a ton of sense as a short-term, backup option if Landry Jones explores greener pastures.

The Cleveland Browns released the 37 year old McCown yesterday in a bit of a roster dump, getting rid of Tramon Williams, too. The move was expected. McCown has zero benefit to the rebuilding Browns – he’s at the end of his career for a franchise (still) seemingly at the beginning. They’re moving on with whatever is left of RG3, Cody Kessler, and presumably, a new face added this offseason.

At his age, it’s hard to envision any team letting McCown compete for a starting gig. He has no long-term value to a team, not even in any hypothetical, and his injury history makes it difficult to think he can get through an entire 16 game season unscathed.

But as a backup? That he can do and do well. He’s still apparently interested in playing football, according to his agent, who put out a short platitude after being cut. From Cleveland.com.

“We appreciate the Browns giving Josh a chance to catch on with another team,” his agent Mike McCartney told cleveland.com. “Josh plans to continue his playing career.”

Pittsburgh, of course, has a level of familiarity with him. Believe it or not, he’s only made one appearance in his career, last season, coming in relief of Cody Kessler. But he’s someone they’ve had to prepare for almost every meeting because of the wacky carousel of quarterbacks Cleveland has gone through.

I know it’s generally lip service but here’s what Mike Tomlin had to say on McCown earlier this year.

“Josh McCown is a savvy veteran, a guy that has been around, a guy we’ve been exposed to in the past. He’s a guy that I am sure is a quick study and capable of stepping into less than ideal circumstances or on short notice, or on a limited number of snaps.”

That checks all the boxes for a backup QB. A veteran who is capable and experienced in spot starting and coming off the bench cold, as he did against the Steelers. He knows how to prepare, he has the mindset required to go from Clark Kent to Superman in an instant.

It doesn’t preclude the team from drafting a QB either. They serve different roles. A guy like McCown as the immediate Plan B, a rookie a potential Plan A three years from now.

He’s a well-traveled player, the definition of a journeyman, who is used to coming into a new city, picking up a playbook, and being asked to execute it. His stops include:

McCown tweeted out a then-viral photo to visualize all the places he’s been…and then some.

When your daughter has jersey day at school and she doesn't have enough friends to wear all the teams #2missing pic.twitter.com/KJ7jN6jN8d

The Steelers seem open to bringing back Landry Jones. But in the same breath, Art Rooney II has acknowledged he’s someone who is going to test the market. There’s no guarantee he returns; any chance to compete for a starting gig, and the starving-artist position that is quarterback, there are always teams desperate, Jones will likely bolt for that opportunity.

Pittsburgh can’t fill that with *just* a rookie. It will mean bringing in another veteran. There are plenty to choose from – we mentioned Shaun Hill on Monday – but McCown might still be the most talented one on the market. At least, of the ones the Steelers could reasonably sign for cheap in that true backup role. The injury history is concerning but in a backup role, it’s mitigated.

No one is asking him to start eight games; if that would ever have to happen, the season is over no matter who the backup is. But he’s quite capable of winning a spot start or two. And that’s what the role demands.