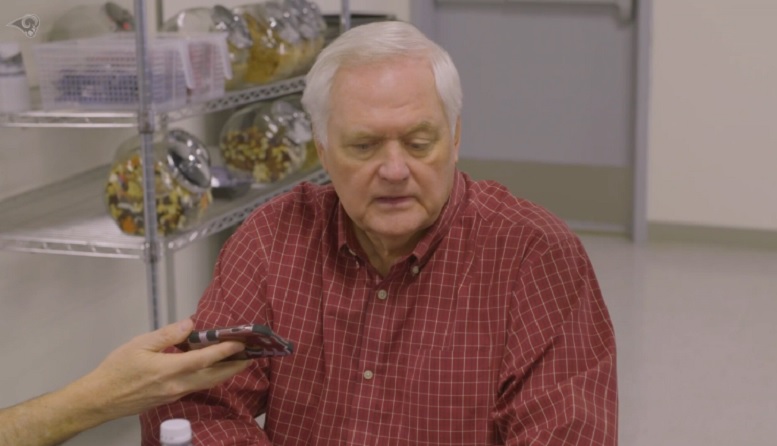 On Saturday, I wrote a post about new Los Angeles Rams defensive coordinator Wade Phillips following his Friday session with the local media and while I was able to include a few published quotes concerning his 3-4 defensive philosophies, I didn’t have all of them from his media session.

I have since reached out to Myles Simmons, who covers the Rams for the team’s official website, and he passed along the fully transcribed quotes from Friday’s session with Phillips. I have cherry-picked the best ones related to Phillips and his thoughts on switching the Rams defense from a 4-3 to a 3-4 scheme for you to read below.

While Phillips obviously doesn’t have anything to do with the Pittsburgh Steelers, I still think his recent quotes are somewhat related to the team and that’s why I have now dedicated a few posts to the Rams new defensive coordinator. Additionally, being as Rams defensive tackle Aaron Donald played his college football at Pittsburgh, I thought several of you might be interested to read about how Phillips plans on utilizing him moving forward in his defensive scheme.

Once again, special thanks goes to Simmons for providing these quotes for me to use. If not already doing so, please follow Simmons on Twitter at @MylesASimmons.

(3-4/4-3, is that a big deal at this point?) No. We’re going to run a 3-4, but how we run it depends on our players. So we’re going to try to utilize our talent. That’s what we’ve done everywhere we’ve been. And we’ve been pretty successful at it. And we’ll stay with that formula.

(3-4 vs. 4-3, is the 3-4 a superior system? or is it just something you’re more comfortable teaching?) No, it’s better. I’ve been in a little bit of a 4-3, and I played 4-3 in college. But when you have a 4-3, you have four linemen — those are the four guys rushing. When you have a 3-4, you have three linemen, and somebody else is coming from somewhere, because it’s going to be a four-man rush most of the time. So it gives us an advantage of them not knowing [who’s coming] protection wise. I think it helps you pass-defense wise. If you look at our pass defenses over the years, if you look at our sacks over the years, they’ve all been top of the league. And I think that’s the key to beating people, is stopping the passing game in this league. So that’s why I’ve stuck with the 3-4, even though… And I added some of the 4-3 stuff, and the ‘bear’ stuff that I did with Buddy Ryan — we kind of implemented it into our 3-4 thinking. So the concepts are there. But we just line up a little differently.

(no Von Miller, do you have to find that kind of player here?) I think we’ve been in the top 10 every team I’ve been on. So, we expect to be able to rush the passer.

(natural nose tackle you see now?) I think our defensive line is really strong — maybe the strongest part of our defense right now. We’ve got a lot of good players on the defensive line, from what I’ve seen so far. And I’m looking forward to working with those guys.

(How do you see the personnel working into your 3-4?) Yeah, our schemes are to fit the players. But four out of the last six times I’ve come in as a defensive coordinator, they ran a 4-3, and we went over to 3-4 and we’ve been very successful. So hopefully it’ll be the same thing here.

(How do you coach takeaways?) Part of it’s winning. IF you’re winning, you get more, because at the end of the game, they’ve got to throw it more, those kinds of things. That’s part of it, too. But it’s just like tackling — i think there are fundamental things that you teach. And as far as turnovers are concerned, same thing with tackling. And after you get a turnover, how to score with it and those kinds of things. We work on every phase of it. And they have a plan and a technique to do those things.

(Concern to you at all trying to implement 3-4 that Rams don’t have many experienced LBs?) Well, not really. Like I said, I’ve been in this situation before. We’ve always come up with something. I don’t foresee a problem. I think we have a lot of good defensive linemen. We have some linebackers, some of them haven’t played much, but they look like they’re good players. And the secondary, the same thing. I think we’ve got some guys who maybe didn’t play a whole lot that are going to come through for us. But we just have to see their talent and do what we can do with it.

(Turnovers and sacks not there for Rams in past, is that something you try to instill when OTAs start?) Yeah, again, it’s not just scheme. I think it’s players and getting them to do the things that they can do well. I said it before, but guys who rush the passer, they’re going to be rushing the passer. They’re not going to be dropping in coverage and that kind of thing. That’s what we’ve done throughout my career. So we’ll find out what people can do and try to utilize them that way.