It’s officially draft season. That means everyone and their grandmothers are wondering who will be the new saviours on their team coming from college.

The Pittsburgh Steelers are going into April’s draft in a decent place, not too many pressing needs – and the opportunity to get some impactful players to help push them over the edge for a Super Bowl run.

With Ben Roethlisberger’s recent retirement pondering, and subsequent reaction from people saying that his replacement needs to be drafted now – I decided to look and see what the Steelers draft class would look like if they chose a quarterback in round one.

I am by no means advising that they do this, this is purely to satisfy my scientific curiosity. Using fanspeak.com’s wonderful mock draft simulator, and Bleacher Report’s Matt Miller’s big board – I selected seven round for the Steelers

You can view the entire draft here. 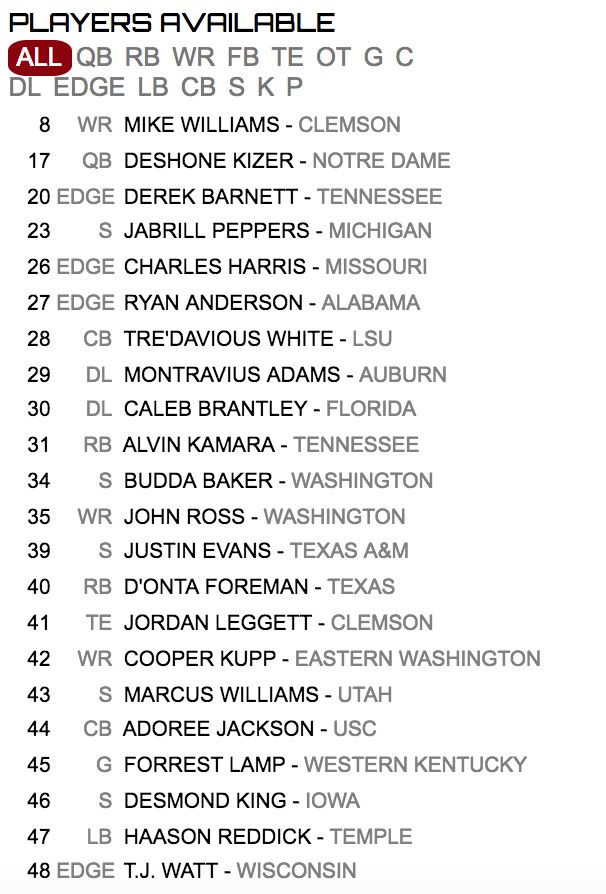 This is the whole point of the experiment to take a quarterback here. Somehow DeShone Kizer fell to me at 30 (ranked 17th for Miller. Each of DeShaun Watson, Mitch Trubisky, and Patrick Mahomes are all off the board.

For this experiment to work, we also need to compare what would happen if Kizer wasn’t going to be the pick.

The best player that was left on the board is wide receiver Mike Williams. The Clemson receiver is rated as Miller’s 8th best prospect, but no one in the simulation wanted a receiver in the first round – Corey Davis went to Arizona at 13th overall as the only other receiver off the board.

There were two edge rushers that I would have been interested in that were available – Derek Barnett and Charles Harris. Barnett is a highly rated player, but perhaps isn’t as suited to playing 3-4 OLB – while Harris has been profiled on these pages already and I know some people would want to pick Jabrill Peppers here too.

I’m not a Peppers fan, he’s a fantastic athlete, so I would have picked Harris here personally. 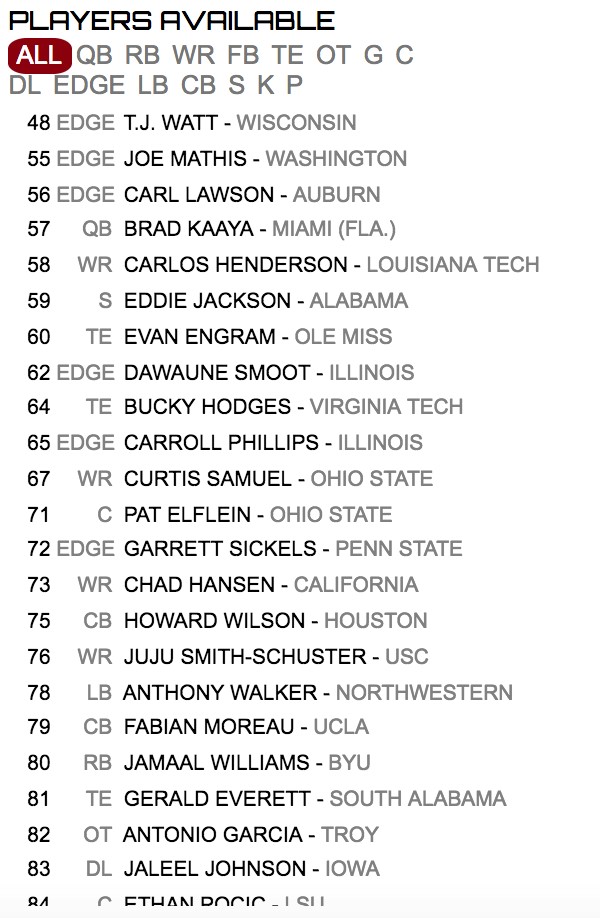 Just a note, that Brad Kaaya is still available for the Steelers in round two, meaning that no quarterbacks went between Pittsburgh’s first two picks.

Because most people will want the Steelers to take an EDGE rusher early, it’s good to know that were several good options available should Pittsburgh decided to wait – Joe Mathis, T.J. Watt, Carl Lawson, and Dawaune Smoot.

In the secondary, a lot of cornerbacks were gone by this point – 11 so far, including the preceding three picks. The likes of Fabian Moreau, Kevin King, Cameron Sutton, Chidobe Awuzie, and Corn Elder were still on the board however.

At safety, I’m a big fan of Eddie Jackson who was still available, but so are Marcus Maye, Obi Melifonwu, and Lorenzo Jerome – leading me to believe that I can wait on a safety.

The tight end options include Evan Engram, Bucky Hodges, Gerald Everett, Jake Butt, and Cole Hikutini, so again – we can wait on an insurance option for Ladarius Green.

I’m going to choose Watt here, given that there are enough players in the other positions I want, EDGE is a need – and Watt is the highest rated. If you wanted Lawson or Mathis, you can mentally switch them if you want.

I chose Watt for his versatility, ability, and rawness – knowing that he can develop even further. Perhaps I’m blinded by the name a little bit too. 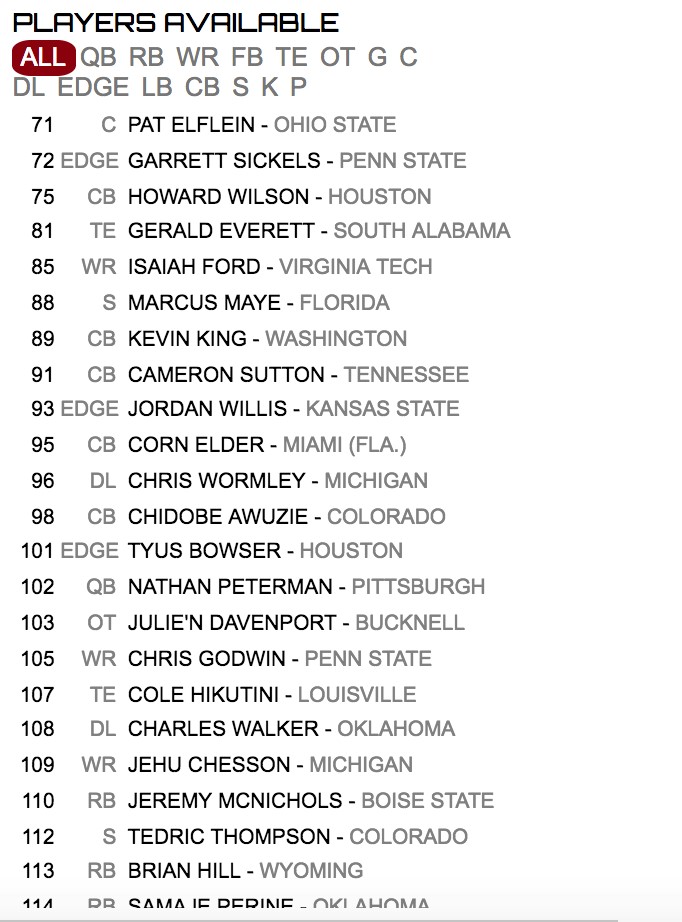 This was a tough choice. There are quality starters available at pass rusher, cornerback, safety, tight-end, and along the offensive line. There are even wide receivers, and running backs that interest me here too.

Jeremy McNichols, Brian Hill, and Samaje Perine are all great options at running back, but I reasoned that I could wait on running back. Likewise, Jehu Chesson, Isaiah Ford, Chris Godwin, and Dede Westbrook are fantastic receivers – but I wanted to focus elsewhere.

My options were down to tight-end Gerald Everett from South Alabama, Florida safety Marcus Maye, or any of the four corners who had fallen this far – Kevin King, Cameron Sutton, Corn Elder, and Chidobe Awuzie.

I thought that Lorenzo Jerome may still be there in the next round at safety, and risked one of the corners falling that far too. That was a mistake that I’d like to have back. 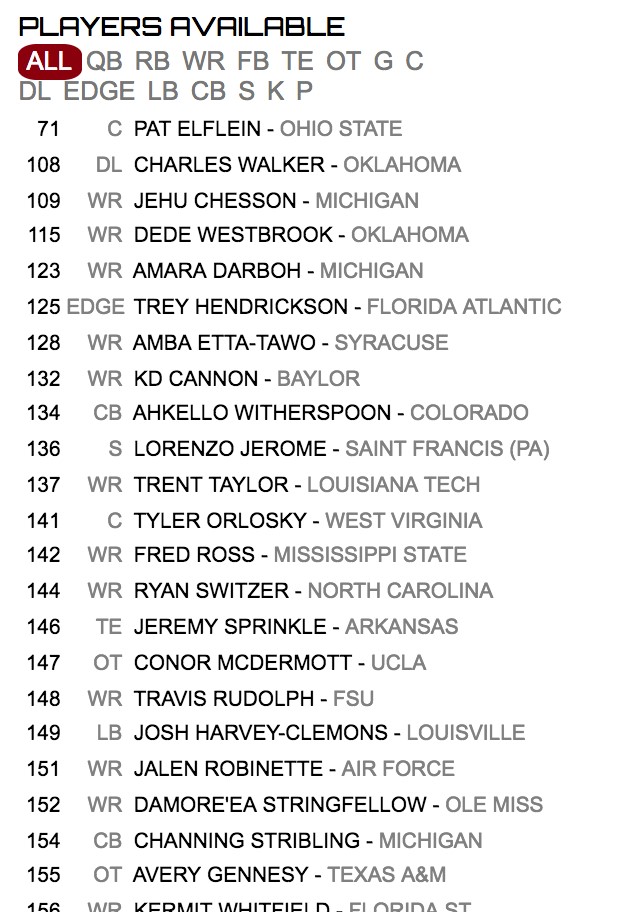 They didn’t. Three of corners went before the end of round 3, but Awuzie lasted until five picks before the Steelers’ fourth round selection. If I was choosing again, Awuzie would be my preferred selection.

Center Pat Eiflein, Miller’s 71st ranked player is still available at 134 overall, and wide receivers Chesson and Westbrook are also there again, and they represent good value. If the Steelers needed interior offensive line help – Eiflein would be the choice – but I don’t think they do.

Lorenzo Jerome is the last safety that I think is worth picking, so I took him in lieu of those corners. Youngstown rusher Derek Rivers is getting a lot of hype recently, and would be another option here – but I was disinclined to take another rusher so early. 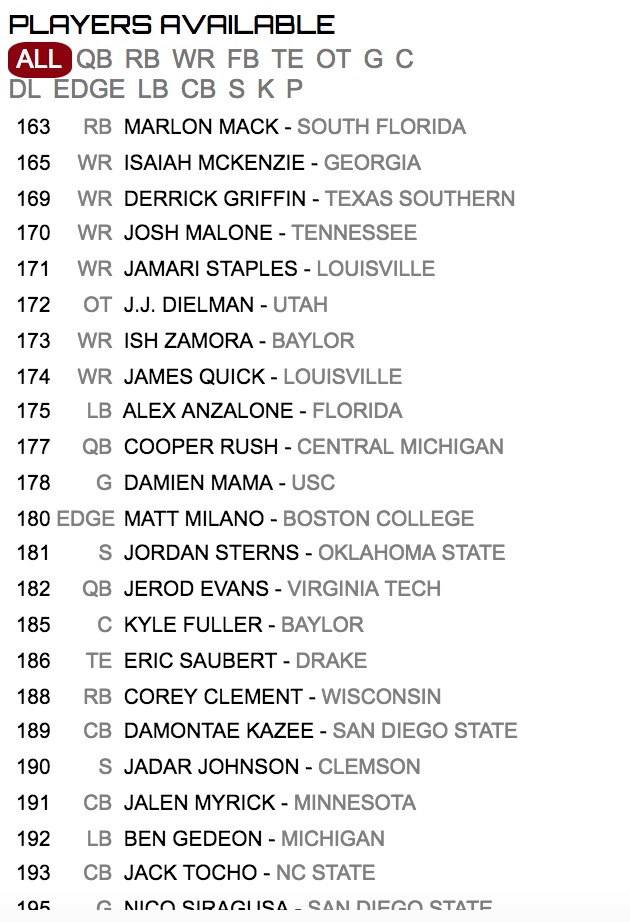 These selections had the added complications of trying to figure out who would still be there for the Steelers’ projected compensatory pick ten selections later.

The two players I was most interested in were inside linebacker Alex Anzalone from Florida, and slot corner Damontae Kazee from San Diego State.

There was also Ejuan Price from Pitt, but he wasn’t the last EDGE rusher that was draftable, compared to the corners and inside linebackers.

At this point, I was expecting defensive lineman Tanoh Kpassagnon to be there in the sixth round, and James Conner available in the seventh, with the potential backup of taking another edge rusher if either weren’t there.

Round 6: James Conner – Running back 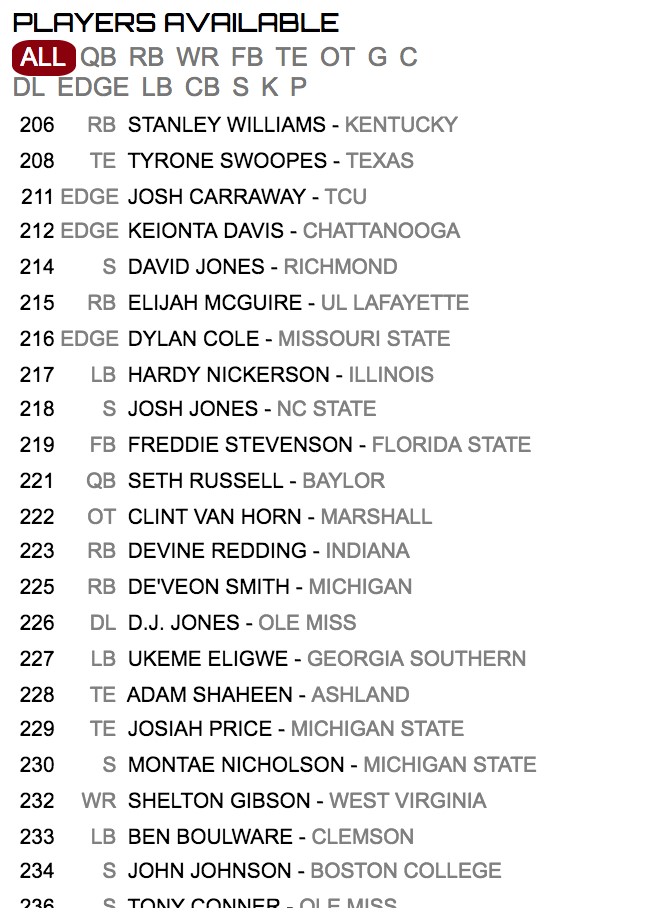 Unfortunately, Kpassagnon went a few picks ahead of me, so I decided to guarantee I’d get James Conner. I like Conner, I like his story, he’s a good player. A backup running back is a need, and Conner is an ideal fit. He’d also bring a decent following from Pitt too.

I think he’d have an impact for the Steelers’ and all that value both on and off the field would be huge for a sixth round pick. 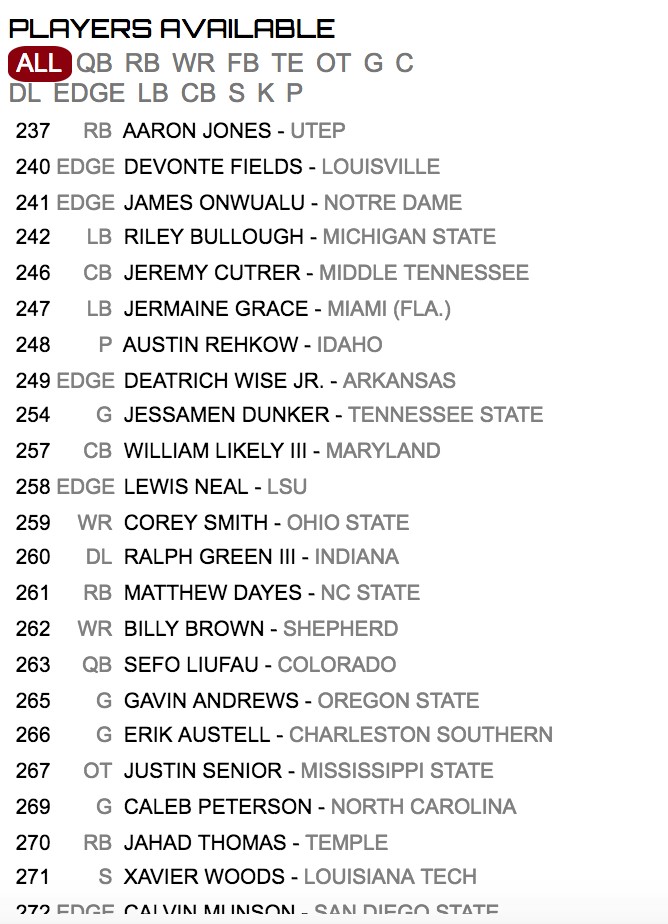 The 7th round is all about picking players who have a chance to make an impact. I’ve seen some people say that Devonte Fields is a potential day two pick. Here he was in the seventh, and in a position of need – why not?

If I was trying this experiment back again – determined to take a quarterback in the first round, I wouldn’t take a tight-end so early, especially in this class. There are players that would be available later on at tight-end that I would have been happier with than who I ended up with. Someone like Adam Shaheen in the sixth round, or Eric Saubert in the fifth round. That would ensure that Chidobe Awuzie would be a Steeler, and give more flexibility as the draft progresses.

Overall though, it’s not a bad class. If this is what the Steelers get I wouldn’t be disappointed. Taking Kizer is limiting – but when it came to the second round, there weren’t many options outside of an edge rusher that excited me. I might have taken Eddie Jackson, which meant I would have double dipped with Derek Rivers in the fourth round instead of Lorenzo Jerome.

Selecting Awuzie would not stop me from drafting Kazee though – and getting two corners, one slot and one outside would be a great haul. 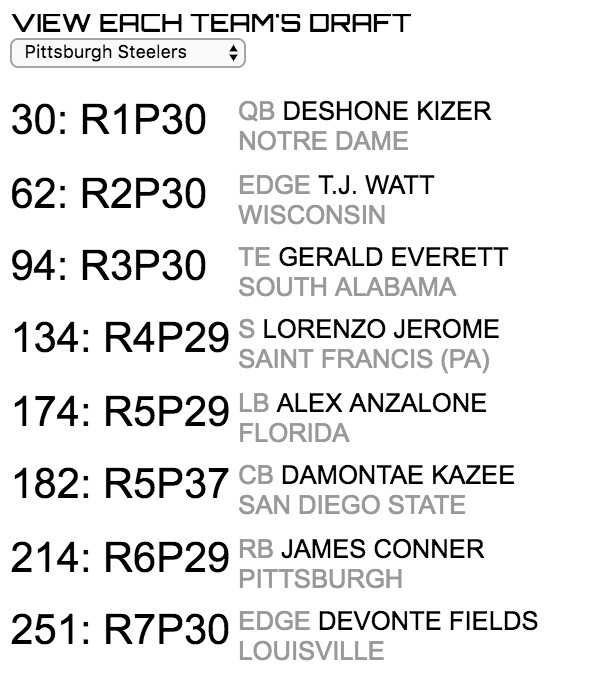