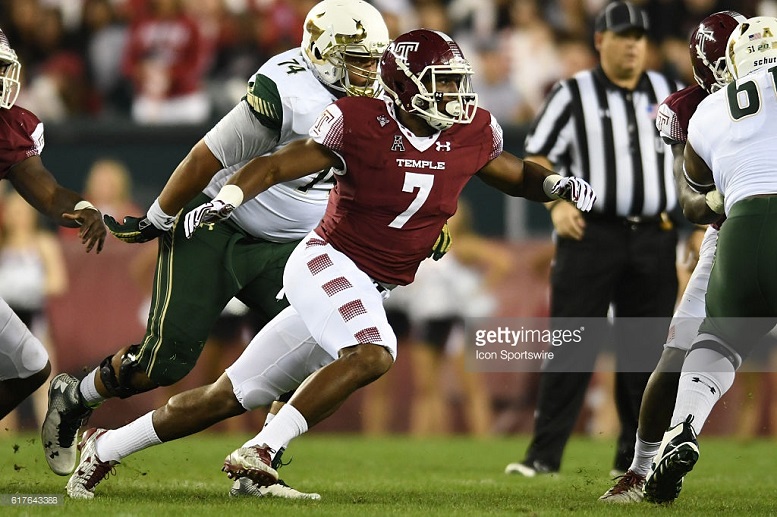 I have one more major media mock draft to pass along to all of you on this Wednesday and this one comes courtesy of Mel Kiper Jr. of ESPN.

In his second mock of the first round of the 2017 NFL Draft, Kiper has the Pittsburgh Steelers selecting Temple edge rusher Haason Reddick with the 30th overall pick. Kiper writes of the selection:

Sure, Bud DuPree started to show some things last season, but if not for James Harrison dominating Father Time, where is the consistent pass rush? The bottom line is, the Steelers need more help, and Reddick can come in and give them some reps in that role. He had 21.5 tackles for loss last season, and the traits match the production. Get to know this name.

This isn’t the first time that we’ve seen Reddick mocked to the Steelers by a major media draft analyst so far this offseason as Daniel Jeremiah of the NFL Network also has Pittsburgh selecting him 30th overall in his latest offering.

To recap, Reddick played in 47 games during his college career at Temple and registered 148 total tackles of which 46 of them resulted in losses. He was also credited with 18 total sacks of which 10.5 of them came during the 2016 season.

While Reddick’s tape certainly is impressive as a whole, there are still several draft analysts who believe he might be best-suited to play inside linebacker in a 3-4 defense or weak-side linebacker in a 4-3 defense at the NFL level. I’m willing to bet this position discussion will continue long after the upcoming scouting combine takes place in Indianapolis a few weeks from now.

In case you have forgotten or maybe even missed it, Kiper had the Steelers selecting Missouri edge rusher Charles Harris 30th overall in his first mock draft of 2017 that he released nearly a month ago. In that offering, Kiper didn’t have Reddick being picked in the first round. In his latest mock draft, Kiper has Harris being selected by the Atlanta Falcons 31st overall.

In case you missed it, Alex Kozora has already profiled Reddick on the site and you can read that post by following the link below.