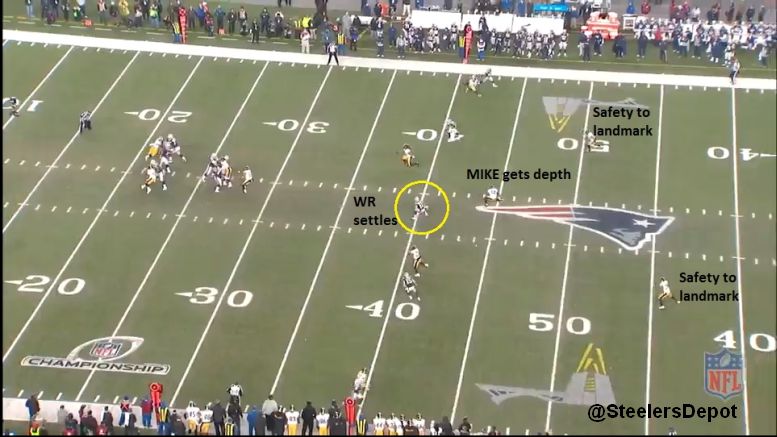 I’ve finally been able to start to sift through our charting from the AFC Title loss. It’s always something we lean on for creating some quantifiable clarity for how the Pittsburgh Steelers’ defense functioned under Keith Butler.

Shortly after the game, Dave Bryan had a couple of solid tweets about Butler’s lack of aggression against Tom Brady. Here’s the big one.

But there are actually times where dropping eight into coverage, rushing three, is a good and predictable decision by Butler. We’ve written about when it happens and it’s legitimate effectiveness. From back in early December.

Though it may be frustrating to see Keith Butler send only three on certain downs, there’s usually a good reason behind it. It’s run against unathletic quarterbacks, ones who prefer to hang in the pocket, lessening the issue in having strong rush lane integrity. And he’s run it in the red zone to tighten up already difficult throws, restricted by the back of the end zone, to force the quarterback to be perfect.

It worked against the Indianapolis Colts last year, a Jarvis Jones interception. And again versus the New York Giants this season, a Lawrence Timmons pick. You see both in the article linked above.

And against Brady, it actually worked. In the red zone, just as it did in those other games.

It’s admittedly a small sample size but three times in the Title Game, Butler dropped eight in the red zone versus Brady. Brady went 2/3 for 6 yards, no first downs, and one failed down conversion.

They dropped three another time, forcing Brady to scramble and eventually was sacked by Sean Davis but because of the quirks of our chart, it ends up counting as a four man rush.

Bottom line: in the red zone, rushing three even slowed down Tom Terrific.

Where Butler went wrong was applying that strategy to the rest of the field. Based on my charting (numbers differ from Dave slightly but results are the same), outside of the red zone, Brady went 10-14 for for 127 yards, no sacks,  and 2/3 on third down when the Steelers rushed three.

Bottom line: outside the red zone, Brady did whatever he wanted to. You, uh, probably noticed that.

The difference? In the red zone, you can tighten up every throwing window because the deep threat isn’t nearly as viable. The back of the end zone puts a lid on things, not expanding the safeties and seam defenders nearly as much as outside of it. Spot dropping becomes more effective because you basically have a player in every single possible window (deep thirds, flats, hook zones).

Here’s a look at three of these instances, including the three/four man rush sack by Davis. All zone coverage. 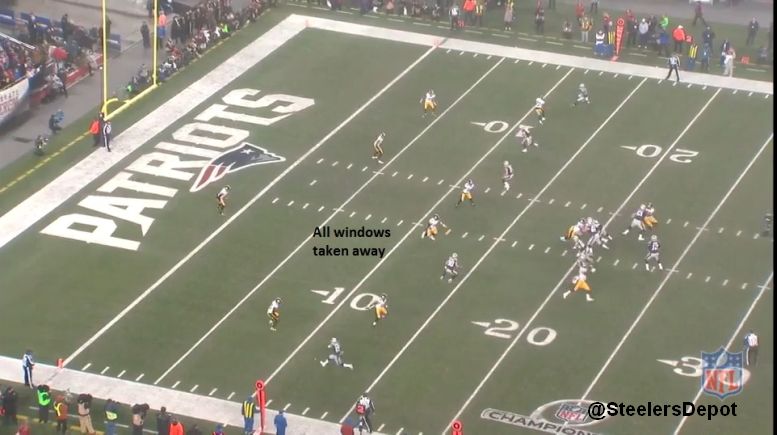 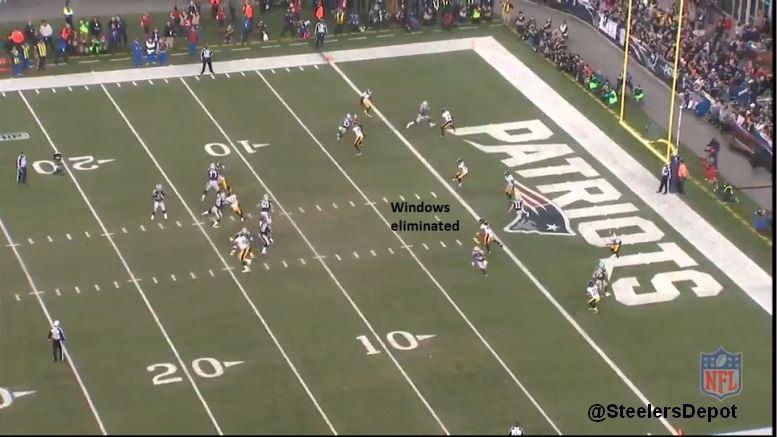 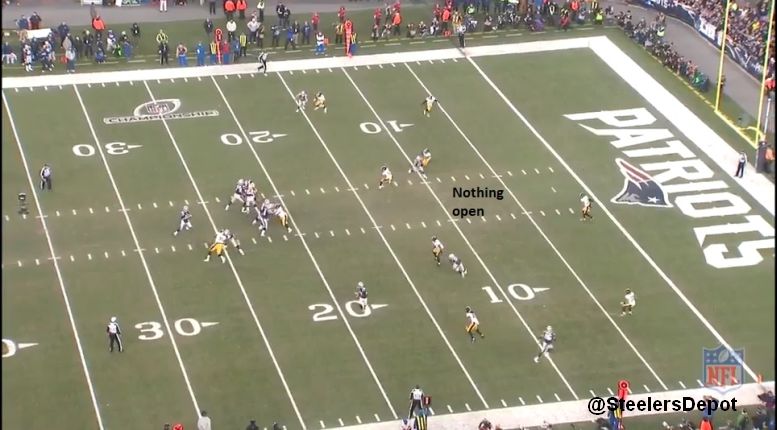 No windows. No easy throws. And the stuff that is open is given up underneath, short of the sticks/goal line, where the benefit of zone coverage comes into play. Vision to the football, drive on the throw, tackle the catch. Happened every time.

How does it play out outside of the red zone? Well, you probably know the results. It looks like this.

This was on 3rd and 10. Steelers go Tampa 2. Safeties and MIKE linebacker (Timmons) all expand because of the possible deep threat, allowing Edelman to settle underneath the MIKE, sit down, make the catch, and pick up the first down. There’s the problem.

Keith Butler had the right idea. But he went too extreme with it. And it did nothing to help this defense.