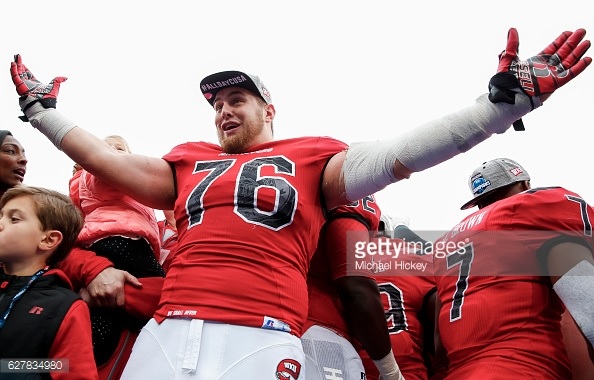 Fox Sports’ Peter Schrager unveiled his first mock draft early this morning and, uh, he went in a new direction with the Pittsburgh Steelers’ selection at 30.

Schrager has the team taking Western Kentucky OL Forrest Lamp 30th overall. I’ll let him explain because there’s no way I could.

“The four-year starter gave up zero sacks in his final two seasons with the Hilltoppers. A big boy who can move inside or stay outside, he provides versatility on a Pittsburgh offensive line that could use a few more big bodies who can play right away.”

Lamp is a good player, there’s no question about that, but there is absolutely zero reason for the Steelers to entertain the idea of taking a linemen in the entire draft, let alone in the first round. You can argue the pick in a lot of different directions. It doesn’t just have to be outside linebacker. That’s fine. It can be a corner, a tight end, heck, throw a quarterback on there and I’ll understand it, even if I don’t agree with it.

But a linemen? *throws computer*

If you really need the reasoning, the team’s starting five offensive linemen are set not only for 2017 but probably for another year after that. Alejandro Villanuvea, Ramon Foster, Maurkice Pouncey, David DeCastro, and Marcus Gilbert. Foster is the only one not in long-term plans and his replacement is probably going to be B.J. Finney, who showed well in relief last season.

At the least, it would take Lamp a full year to maybe crack the starting lineup, counter-intuitive to the idea of selecting a linemen year one, guys who usually get on the field right away.

I’m all for being different with the selection. But this selection is way off the mark. If anyone tries to convince you this is a good idea, you run far, far away.