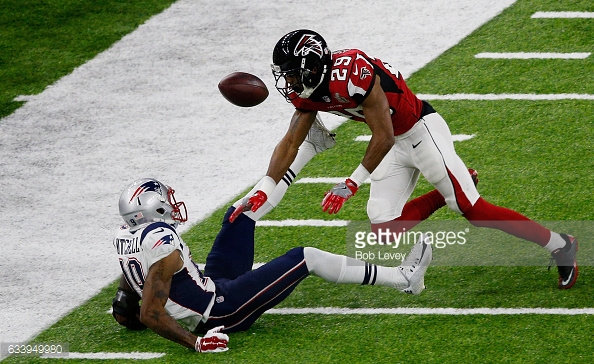 The Pittsburgh Steelers had a pair of their own former players on the field last night during the Super Bowl, one on either side, and both of them made an impact early on—in opposite ways. Most are probably more familiar with Patriots running back LeGarrette Blount, who spent most of the 2014 season with the Steelers before being cut.

But you probably don’t need to be reminded at this point that Falcons cornerback C.J. Goodwin was in the Steelers’ organization in 2014 and 2015—as a wide receiver. A small-school product who went undrafted, Pittsburgh picked him up on the advice of Mel Blount and gave him a chance.

He didn’t get to participate a whole lot during the 2014 offseason because he was brought in late and also dealt with some injuries, but they did like what they saw. He didn’t even play in the preseason and yet they still kept him on the practice squad for the entire season because they wanted to see more of him in 2015.

They did see more of him the following year, but not quite enough, and he ended up not making the roster, nor was he retained on the practice squad. Nobody else signed him, either. He spent 2015 out of football. But the Falcons signed him to a futures contract and converted him to cornerback.

And last night, he made a couple of plays in spot duty. On the first drive after the Falcons scored a touchdown, he made two plays to force the Patriots offense back off the field. He broke up a pass down the right sideline on first down and then came up aggressively to cut the runner down on a screen on third down to force New England to punt.

Blount, meanwhile, got that previous scoring drive kicked off by fumbling the ball on the Falcons’ side of the field, which Atlanta ultimately capitalizing by getting into the end zone. It was important for the Falcons to be able to clamp down on Tom Brady and not let them get right back into the game. Goodwin provided that. At least in the first half, as we saw how the second half played out. But that doesn’t take away from what he showed.

Goodwin played a little over 100 snaps during the season on defense, but he played nearly 300 on special teams. He had a couple of pass deflections and less than 10 tackles during the regular season. That is pretty typical for a depth player. Perhaps somebody the Steelers wish they should have held on to.

But I wouldn’t blame them too much, at least personally. They were looking at him as a wide receiver, and they already had two wide receivers making the practice squad this past year. And they did convert Roosevelt Nix to fullback and find a role for him after the Falcons let him go.

Of course, the Steelers have some success with conversion projects. Alejandro Villanueva is a pretty big one, both figuratively and literally. It would be nice for them to have Goodwin. But kudos to Atlanta for seeing the defensive potential in him.