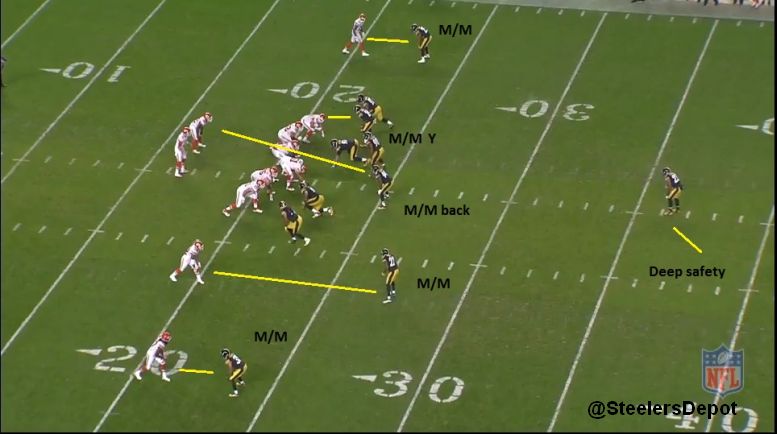 We’re starting to hit a lull in the offseason, clearly. I don’t know about you but I’m dying for some football. So we’re jumping back into the tape today to break down one of Keith Butler’s blitzes we’ve never gone over yet. Sound good?

Usually with these breakdowns, we’re looking at something exotic. A blitz with a safety, a corner, or both. But you can get pressure with just the front seven and a balanced, stunting scheme too. What we’ll look at today is Butler/LeBeau’s Dog Rush 1.

Fun fact. In LeBeau’s playbook, a “blitz” technically didn’t even involve sending five rushes. A blitz only counted if six or more defenders came. A five man pressure was referred to as a dog. See it for yourself in LeBeau’s playbook.

And here’s the scheme itself. 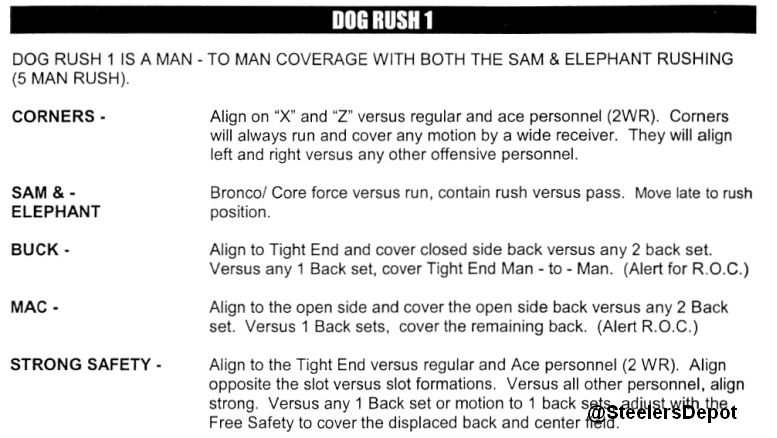 It’s a true man-free (Cover 1) coverage the Steelers used, in the example we’ll show you, back in Week Four against the Kansas City Chiefs. Here, they have a subpackage swapping out the strong safety for Justin Gilbert, the 4th corner, to match up against Travis Kelce, the Y tight end. So basically, the strong safety and Gilbert have the same responsibilities in LeBeau’s coverage.

The other corners play man coverage with the outside corners rolled up in press alignment and rerouting the release of the receivers in order to disrupt the timing. The free safety is the deep middle defender reading the QB while Lawrence Timmons, the only linebacker in coverage, will release to the same side of the back and cover him in man coverage.

The rush is fairly straight forward with one wrinkle. The down linemen will stunt. The crasher – in this case Cam Heyward – stunts first while the looper – Stephon Tuitt – is second, working over top. Vince Williams becomes the away side end in this example since the Steelers are in nickel, not base like LeBeau has drawn up. The edge rushers serve as contain. 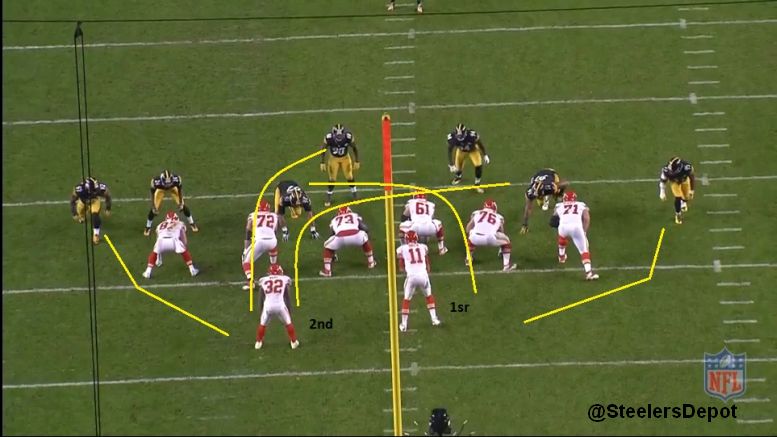 The stunt screws with the Chiefs’ pass protection with left guard Zach Fulton never passing the crashing Heyward off to anyone, allowing Tuitt to come free on the loop. And Williams occupies the left tackle, letting James Harrison in free off the edge. Total mess and immediate pressure for Pittsburgh. 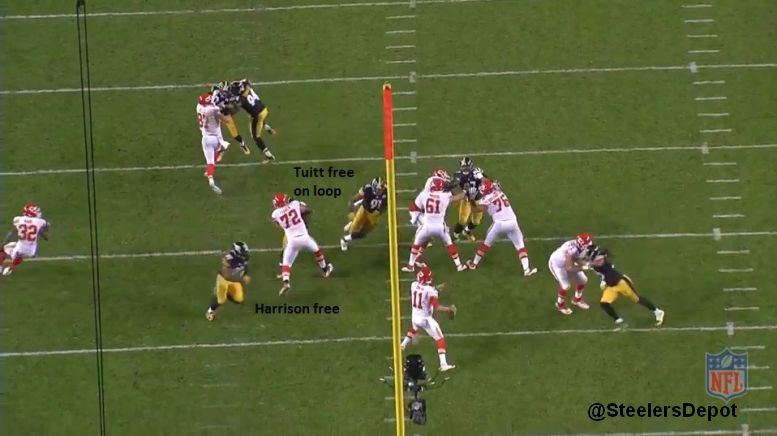 Alex Smith is forced to throw the ball quicker than he’d like and with Artie Burns pressing #1 on the outside, the timing of the throw is even worse. Ball is out before Smith wants to and the receiver can’t get downhill in rhythm. The pass falls incomplete, the Chiefs have to punt, and two plays later, Pittsburgh scores to begin the blowout win. 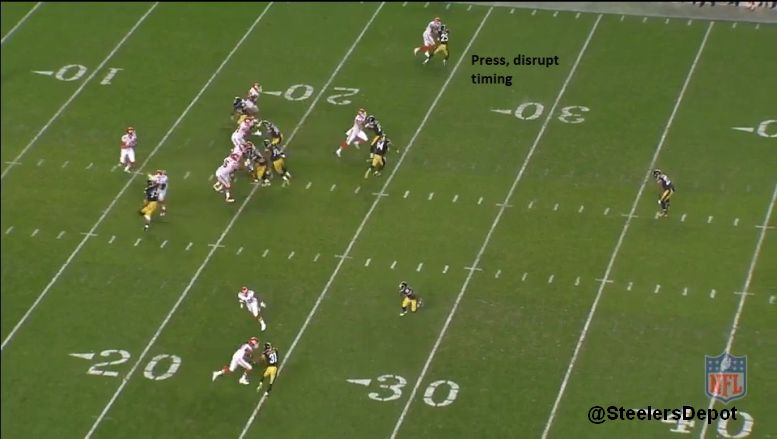 Let’s have a look from the aerial an end zone views.

It’s a good coverage to call when a defense wants to shut down a team with a big threat at tight end like Kelce. And because the substitution eliminates a safety, coverage variety is lessened because you’re guaranteed to only have a single high safety. Man coverage works better here and throughout the game, whenever Gilbert was on the field, the Steelers were in man-to-man.

We normally think of LeBeau, Butler, and the Steelers as a zone pressure team but even Godfathers of the concept like LeBeau will mix in man pressures to give them another tool in the toolbox. This isn’t a call that the Steelers need to play this all the time, it’s serving as a reminder that the defense is more diverse than some will suggest, but it is something that could work effectively against a team like the New England Patriots next season.