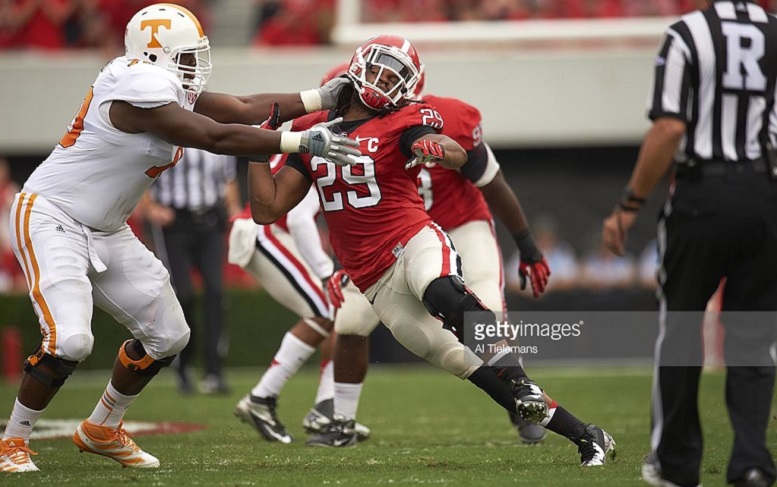 Though the last snap of the 2016 NFL Season has been played, the 24/7 – 365 nature of the National Football League rolls on. With the driest spell of the football calendar approaching, football pundits all over the country are looking for substance to bridge them over to the NFL Draft. Mock drafts and draft profiles make up the present and future agenda but a void is left for past evaluations. While many experts break down incoming prospects, it would be interesting to see how previous draft selections have performed compared to their pre-draft evaluations.

While an individual’s mock draft will never be completely accurate, a lot of people correctly guessed the Pittsburgh Steelers taking Jarvis Jones 17th overall in the 2013 Draft. Following a season of lack luster play from LaMarr Woodley and the offseason release of James Harrison, the selection of Jones was a free space on the Steelers draft day bingo card.

Now four years later, Jones has likely played his last down as a Steeler due to his stalling development as a pass rusher. Many in the Steelers’ organization and fan base are certainly disappointed with the selection, but others have seen the writing on the wall since day one.

The NFL.com profile of Jarvis Jones serves as the ground zero for the biggest complaint of the linebacker’s time in Pittsburgh.

Those who follow the Steelers have become accustomed to the talk of Jones lacking the size for his position. Each offseason since Jones’ arrival in Pittsburgh has featured an abundance of stories of how Jones plans to bulk up in his time off.

The NFL.com piece proceeds to highlight the most important issue in Jones lack of development – his inability to rush the passer. “Doesn’t have elite bend around the corner, and could use a spin or other counter move to keep tackles guessing.”

Though the NFL.com piece was written four years ago, it has held its weight against the notion of time. In fact, if you were not aware that the piece was a pre-draft profile you could be led to believe that it is a recently written critique of Jones’ time in Pittsburgh.

Although there were more than a few non-believers at the time, the overwhelming majority, including Mike Mayock, thought Jones was the perfect fit for the Steelers’ franchise.

“He’s a pretty good fit there in Pittsburgh. If you look at the Pittsburgh edge at linebackers, this kid fits from a body type and an explosion perspective. I think he’ll get on the field and challenge Jason Worilds for the starting spot.” – Mike Mayock

Mayock was not the only one who loved the pick, so did Andy Benoit, an analyst and writer for Sports Illustrated. At the time of the selection Benoit was writing for The Fifth Down, a blog hosted by The NY Times. In his piece titled “Why Jarvis Jones Was Perfect Pick for Steelers”, Benoit states that Jones may be the best pick of the draft.

“From a conceptual standpoint, Pittsburgh’s selection of the Georgia pass rusher Jarvis Jones might be the best pick in the 2013 N.F.L. Draft.” Benoit states.

Benoit goes on to make his case, stating that familiarity and development will hold key for Jones’ success in Pittsburgh. “The Steelers trust immensely in their ability to develop players. Jones appealed to them because, having played in a 3-4 scheme at Georgia that is similar to what Dick LeBeau runs in Pittsburgh, there was less guesswork in determining whether his skills will translate.” Benoit writes.

Unexpected to Mayock, Benoit and the rest of the Steelers’ organization was just how rough the translation of Jones’ skill would become. In what was supposed to be a smooth adjustment has become a train wreck of epic proportions. Injuries and poor play have resulted in Jones mustering just six career sacks, leaving his future in question as the Steelers seem prepared to move on.

With the Steelers searching for a pass rusher yet again in this year’s draft, the review of Jones’ selection could not be more appropriate. The Steelers can ill afford to be wrong again if they hope to take the next step on the NFL’s ladder of dominance.