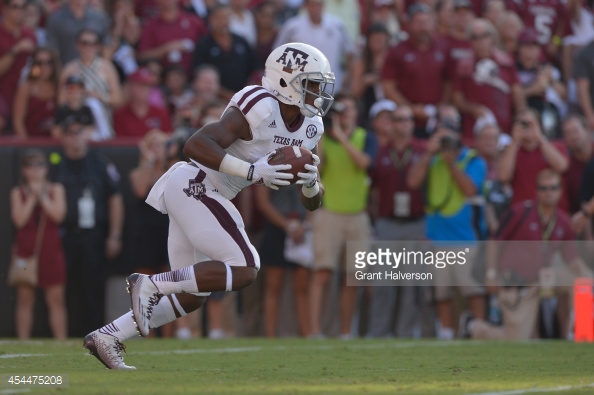 Next up is running back Trey Williams.

Williams is a man about efficiency, not volume. He’ll be one of the smallest players on the field if he makes it to Latrobe but that still means he’s in the NFL, which is an elite club for only the game’s greatest athletes. He left college a year early. And while with the Aggies, he didn’t see many carries, never more than 81 in a season, but his average was ridiculous. Over three seasons in school, Williams averaged 6.6 yards per carry and even scraped the seven yard mark his sophomore season.

He was a top recruit out of high school in Texas, standing out in one of the most competitive and die-hard high school football states in the nation. ESPN ranked him the 5th best back in his class. Rivals and 247 Sports tabbed him as a five star recruit. Williams ultimately stayed close to home, choosing Texas A&M over Alabama, LSU, and Miami, which in essence means, he chose A&M over every school in the country.

And for good reason. He rushed for over 8110 yards and 96 touchdowns, including a ridiculous 3890 yards and 51 total touchdowns his senior year of high school. That’s a good way to get Nick Saban knocking on your door.

But his college career never manged to meet the lofty expectations high school created. He made an impact, to be fair, as a runner and kick returner, but scored 19 total touchdowns in his three years there. And his rush attempts, as we wrote above, only surpassing 70 carries once, his junior season.

So it was a surprise to see him leave school a year early with a relatively light resume. He was invited to the 2015 NFL Combine and put up decent numbers but for his size, or lack of it, there were a bit underwhelming. A 4.49 40, a 33.5 inch vert, and even his agility tests were just good, not great.

Knowing all that, he was one of the unfortunate stories of the draft. An underclassmen who went undrafted and began the journey of bouncing around the NFL. Washington, Dallas, New England, Miami, and Indianapolis. He’s been plucked off the practice squad twice by Dallas and Indianapolis, giving him his closest taste of the NFL, but has yet to appear in an game.

During that time, Williams made the smart decision to head back to school to finish getting his degree. And now, he’ll hope to stick around in Pittsburgh a bit longer than any of those other places.

Efficiency, not volume. That’ll be the key to making it through training camp because this group is sure to be crowded. You’ll have Le’Veon Bell who, to be fair, will get a lot of rest in Latrobe. But then there’s whoever his backup is; DeAngelo Williams, a rookie, the triumphant return of Amos Zeroue, Fitzgerald Toussaint, and the host of running backs expected to join Williams (Brandon Brown-Dukes, Karlos Williams, Gus Johnson, Dreamius Smith). Lot of people, not a lot of carries to go around, and there’s no guarantee all these guys make it to Latrobe.

The good news for Williams is he’s done a lot with a little. And that’s a handy philosophy to live by.