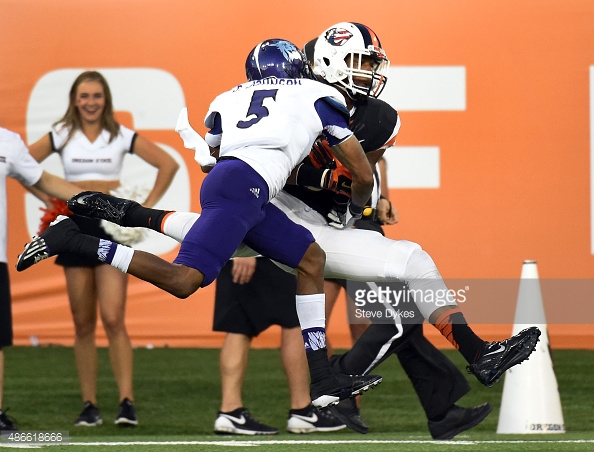 Next up is CB Devonte Johnson.

In five years we Weber State, Johnson played in just two seasons. His redshirt freshmen year, seeing spot starts, and didn’t see the field until his senior campaign, three years later. What’s inbetween was wiped out by academic problems, forcing him to the sidelines, but one true relevant season, 2015, was all he needed to get on the NFL’s radar.

He was a multi-sport star at South High School in Denver Colorado in football, basketball, and track. As a receiver, he averaged over 21 yards a reception his senior year and in basketball, he averaged more than 14 points per game.It earned him a spot on Weber State’s squad and after redshirting in 2011, he saw six starts in his first official season. That was supposed to propel him into a successful career there. But he was ruled academically ineligible for 2013 and 2014, derailing his college career.

He told the Standard Examiner what was going through his head those two years.

“Teammates, the coaches, people on the whole Weber State campus were telling me to keep my head up. That really sparked it. At times I had to dig deep within myself to pull out the best character that I can be. God was a big part of that.”

Johnson was able to get back on the field for 2015, his senior year, and flourished. Named a team captain, he started all 11 games, and was a second-team All-Conference selection.

Not a big guy, weighing in at under 5’11 180, he – to use the cliche – jumped out of the gym at his Pro Day. He jumped 41 inches in the vertical and 11’2″ in the broad. The former would’ve been just behind Jalen Ramsey, a top ten pick, for the top vertical and his broad would’ve been third.

Those measurables weren’t enough to get him drafted but the Atlanta Falcons called moments after the draft ended. They carried him through camp, briefly signed him to the practice squad, before tossing him in late September. He was a free agent until the Steelers signed him to a futures deal last week.

It’s unclear if the Steelers envision him as a slot or outside corner, though frankly, I’m not sure it matters. Depth is thin at both spots, leaving the door cracked for a guy like Johnson to catch the coaching staff’s attention. That’s often done through someone who has a unique level of athleticism which Johnson, as his numbers at least suggest, has.

Even if it doesn’t result in a spot on the 53 man roster, those odds are thin for anyone we’re talking about in this series, initially at least, there’s a chance to land on the practice squad. Like Shabazz or Marcus Tucker, small school players have stuck around on there with the chance of a promotion.