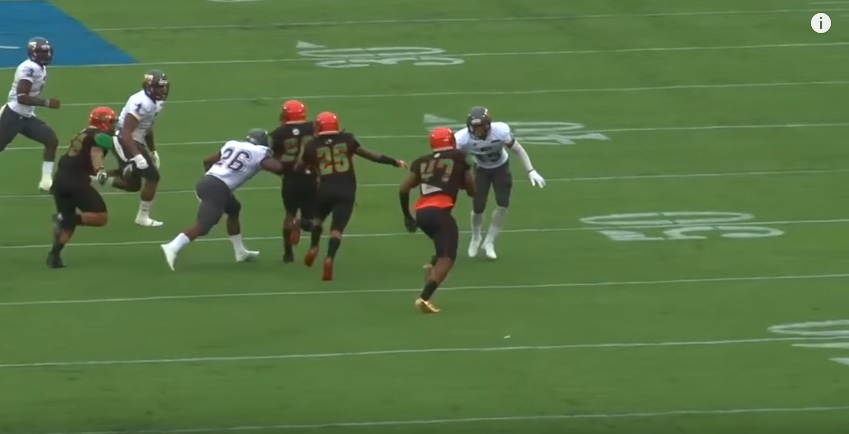 He’s a new guy in Pittsburgh his last name, obviously, is all old school. Blount is Mel’s son and while you can’t expect junior to ever match what his dad did, there is some intrigue here.

Born in Pittsburgh, Blount went to school in Wheeling West Virginia, attending the same high school as C.J. Goodwin who, as you’ll recall, got picked up by the Steelers because of a Mel Blount recommendation. That jump-started his NFL career, one that most recently ended in getting to play – and playing well, mind you – in the Super Bowl.

Blount’s success in Wheeling was remarkable. Numbers I had to double-check to believe. 30 sacks his senior season. I basically never offer you a highlight reel because they’re pointless but I’ll make an exception here. Here’s some footage, beginning with his time as a punt returner, which should give you an idea of how good of an athlete he’s always been. Fast forward to the middle if you want to see some defensive highlights, all while he’s wearing 47, the number of his father.

He was a two-sport star, putting up big numbers in basketball, including a very Shaq-stat line of 38 points, 20 rebounds in one game.

All that earned him a bid to Florida A&M playing for then head coach Earl Holmes. He became a starter for the Rattlers in 2013 and remained int hat role for the next two years. The numbers were solid, not great, but solid, and he has a knack for blocking kicks, doing so twice in his career. Blount finished his senior year with a team-tying 75 tackles, 7.5 for a loss, two picks, and a forced fumble.

At 245 pounds, he killed his Pro Day, running a 4.61, jumping an insane 40 inches, and running a 4.25/7.15 in the shuttle drills. Despite that last moment rise, he wasn’t able to get drafted but stayed local and signed with the Miami Dolphins as a UDFA.

At the time, here’s what he told the media, via the Dolphins’ team site.

He lasted through the preseason before getting cut outright by the team. As far as I can tell, he curiously wasn’t signed anywhere until the Steelers inked him to a futures deal ten days ago.

Frankly, I’m entirely sure if he’s playing inside or out in Pittsburgh. In high school, he was a premier pass rusher but in college, his stats suggest someone who is best suited to play off ball. My *guess* is that he works as an inside linebacker in Pittsburgh. It’s too early to tell exactly how deep this Steelers’ group will be. That’s going to largely depend on Lawrence Timmons’ future here.

Blount’s athleticism and background makes him a candidate to be a strong special teamer. Coverage players come down to guys with speed, tackling ability, and hands (ability to shed blocks and stay clean). It’s someone I’m interested in seeing, to say the least. And you should be, too.