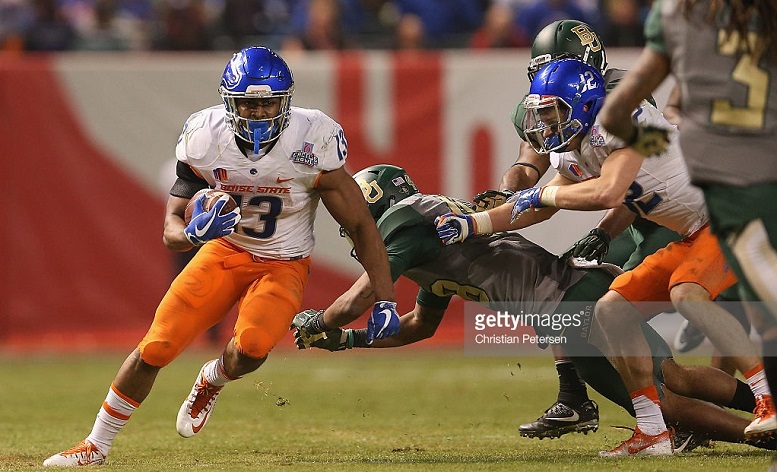 Boise State’s Jeremy McNichols does not have a stand out attribute that separates him from the pack of running backs in this year’s draft class. McNichols is not near the top of the class when it comes to speed, agility or strength, but there are still more than enough reasons to buy into the Boise State running back.

It may feel a tad strange to begin a running back profile by talking about pass catching abilities but this is where McNichols offers the most value. McNichols was a heavy part of Boise State’s passing game, catching passes from both the backfield and split out wide. McNichols shows great versatility when it comes to the route tree and could carve out a role as a third down back. Below is one of McNichols’ biggest plays in the passing game.

As the safety follows the outside route, the middle of the field is split wide open for McNichols. And as BYU’s Fred Warner (#4) is guilty of spending a second too long glancing into the backfield, McNichols blows right by him, the result is an easy touchdown. McNichols could be a quarterback’s best friend in the passing game at the next level.

McNichols does have a few more positives that will interest some teams this spring. Though lacking the flash that is often associated with the running back position, McNichols is a decent downhill runner who can get skinny to squeeze through holes and does display some gap-to-gap elusiveness.

Boise State’s offensive line does no favors for McNichols on the play above. The minuscule sized hole that appears up the middle closes fast but McNichols squeezes his way through the hole, gaining substantial yardage in the process.

McNichols lacks the agility to make defenders miss consistently in the open field but does still show the capability of some gap to gap elusiveness in the backfield. McNichols side steps a penetrating Washington State defender and makes his way to the end zone. Chalk this one up as another play where McNichols’ offensive line did him no favors, making his touchdown that much more impressive.

Vision is detrimental to a running back’s success. McNichol’s vision is a trait that could perhaps use some fine tuning. The running back will show the ability to find the hole and accelerate through it on one play but then will try to unnecessarily bounce outside on the next play.

As you can see on the playing above, McNichols puts his head down and drives right into the back of one of his own blockers, failing to realize a huge hole has opened to his left. McNichols’ second instinct on the play is to bounce outside, resulting in a significant loss of yardage.

It is hard to determine whether McNichols’ inconsistent vision and decision making is a weakness or a by-product of Boise State’s mediocre offensive line. Boise State finished fourth from the bottom in the Mountain West Conference with just 4.6 yards per carry.

Being a running back with no stand out quality, McNichols’ draft stock could rely heavily on being fundamentally sound, except that this not where McNichols lays the ground work for his draft stock, it is where McNichols’ struggles the most. Ball security issues plague McNichols as the running back has fumbled nine times in his last two seasons. McNichols will have to prove that he can be trusted to take the field at the next level and not put the football up for grabs.

Though McNichols’ is an asset in the passing game, the running back does leave a lot on the table as a runner. Having ball security issues and missing a true game changing weapon in his repertoire, McNichols could see himself fall to the end of the fifth round.

Games Watched: vs Washington State, vs UNLV, vs BYU, vs Utah State