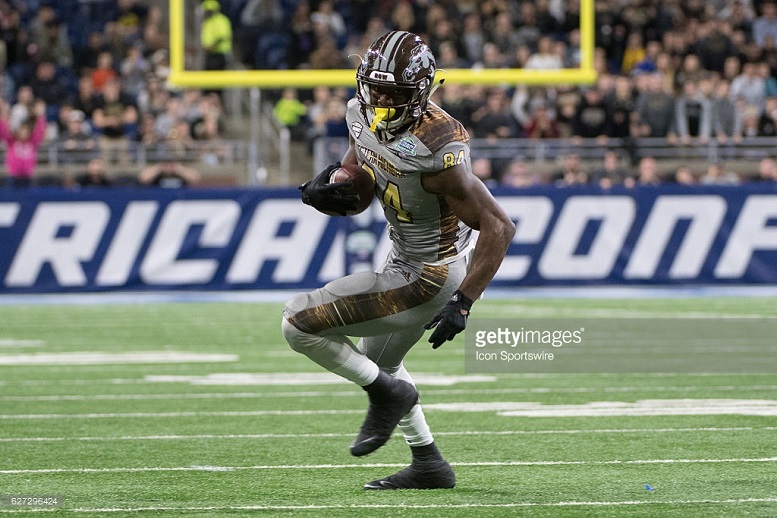 The 2017 mock draft season is now in full swing and with that we are starting to see the first offerings from several of the major media analysts. On Monday, Lance Zierlein of NFL.com released his first mock draft of the 2017 season and he has the Pittsburgh Steelers selecting Western Michigan wide receiver Corey Davis 30th overall in the first round.

Zierlein writes of his Steelers selection:

Antonio Brown is dominant, no doubt, but the Steelers could use a big, reliable target with the ability to catch the deep ball when it matters most.

Davis pulled out of the recent Senior Bowl because of a shoulder injury.

I’ve yet to closely examine Davis’ college tape but as you would probably imagine, his highlight reel is quite impressive.

Now, when it comes to the Steelers, one must really wonder if they would be willing to spend a first round draft pick on a wide receiver this year. Should wide receiver Martavis Bryant ultimately be reinstated after sitting out the 2016 season because of a suspension, the Steelers starting three wide receiver spots in 2017 are pretty much be spoken for when you take into account Antonio Brown and Eli Rogers.

While Sammie Coates had a very disappointing second season, I doubt the Steelers are ready to completely give up on the former third-round draft pick. Additionally, last year’s seventh round draft pick, Demarcus Ayers, appears to be on track to make the 2017 53-man roster as well. Let’s also not forget that Darrius Heyward-Bey is also still currently under contract for 2017.

As we sit here in late January, I would be surprised if the Steelers spent an early draft pick on a wide receiver this year. That opinion, however, comes with the assumption that Bryant will return and stay out of any future trouble with the league.

In the coming weeks, we will most certainly be profiling Davis so be on the lookout for that.