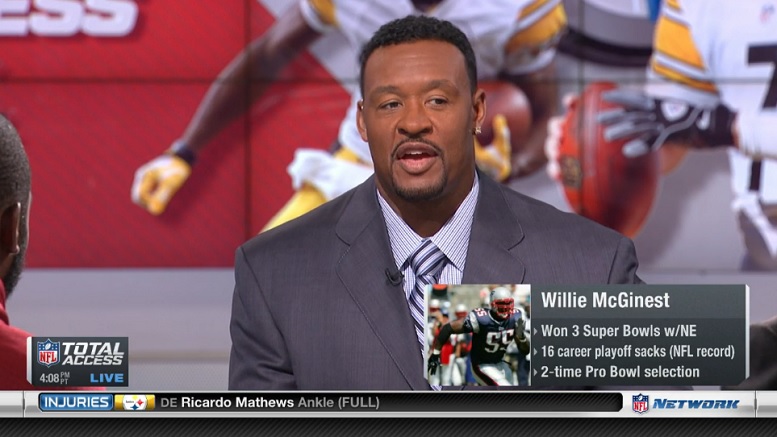 Just because Willie McGinest is a former NFL player doesn’t necessarily mean he’s a great analyst and that really showed Wednesday evening during the nightly edition of Total Access on the NFL Network.

While previewing the upcoming AFC Championship game between the Pittsburgh Steelers and the New England Patriots, McGinest, along with former NFL wide receiver Reggie Wayne, started discussing how the Patriots should go about defending Steelers running back Le’Veon Bell. After initially praising Bell’s ability to run and catch the football, McGinest offered up this gem.

“What you want him to do is stay in the backfield and pass protect because that’s not his strong suit. He doesn’t do that very well,” McGinest said.

What? Has McGinest not watched Bell play during his first several seasons in the league with the Steelers? Bell is one of the best blocking running backs in the league.

While a lot of people will take issue with some of the grading that Pro Football Focus does, here’s what Sam Monson wrote about Bell after he served his three-game suspension to start the 2016 regular season.

I can guarantee you that Bell hasn’t declined this season in that area of his game and thus McGinest doesn’t know what the hell he’s talking about.

Keep in mind that this is the same Willie McGinest that said just prior to the Steelers Christmas day game against the Baltimore Ravens that Pittsburgh defensive ends Stephon Tuitt and Cameron Heyward “can make their money in today’s game.” Heyward had long since been placed on the Steelers Reserve/Injured list and Tuitt missed that game against the Ravens with a sprained knee.

Come on, Willie, like your former head coach Bill Belichick used to always tell you, do your job.