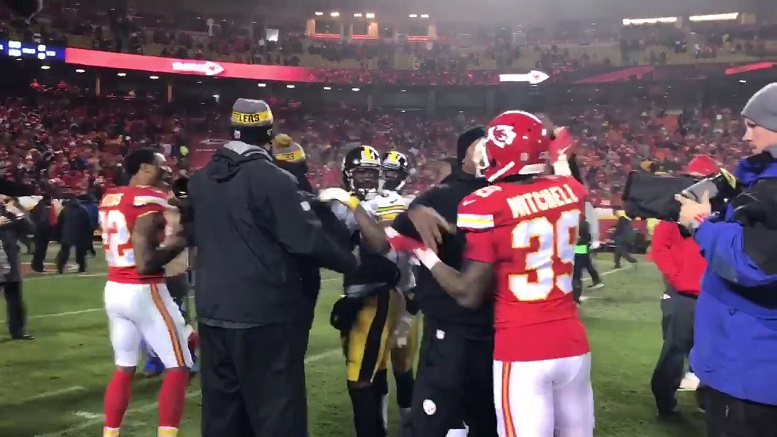 There was a little commotion on the field following the Pittsburgh Steelers Divisional Round playoff game against the Kansas City Chiefs and Josina Anderson of ESPN was there to capture it all.

After the Steelers beat the Chiefs, it appears as though Kansas City cornerback Terrance Mitchell wasn’t too happy with Pittsburgh wide receiver Antonio Brown as he was beginning to make his way off the field. Steelers linebackers coach Joey Porter, of all people, can be seen attempting to diffuse the situation as fellow Chiefs cornerback Marcus Peterson is also seen trying to talk to Brown as well.

A little commotion after the final whistle. #Steelers #Chiefs pic.twitter.com/74P3P7rQjb

After Peters appears to make peace with Brown, Mitchell has more to say to the wide receiver before Steelers safety Robert Golden and defensive end Cameron Heyward intervene.

During his post-game talk with the media, Brown was asked what happened between him and a Chiefs player.

“That’s what happens when guys lose,” said Brown. “They take it personally. After the game, the guy tried to provoke me to get a little aggressive. I’m not an MMA fighter. I’m a football player and we leave it all on the field.”

Brown was then asked if the Chiefs player in question was Peters.

“No. It was the other guy [Mitchell],” Brown said.

Mitchell played 56 of the 67 Chiefs defensive snaps in Sunday’s game and recorded all of one assisted tackle.

As for Brown, he registered 6 catches for 108 yards during the win with His final catch of the night resulting in a critical first down that allowed the Steelers offense to run out the remaining time in the game.