Pittsburgh Steelers fans already know the basics.  QB Ben Roethlisberger, playing late in a game with a 3-score lead over the Miami Dolphins in the Wild Card round of the playoffs, scrambled on 3rd and 8, eventually taking a hit.  Following the game, Big Ben jogged briskly to the locker room, only to show up at his post-game press conference with a walking boot on his right foot.  When asked about his injury, he responded that “we don’t know anything yet, but we’ll find out soon hopefully.”  Twitter imploded.

Everyone ran back to the tape, and it was clear that Miami DE Cameron Wake rolled up on Ben’s right foot.  As Ben went down, he also landed on his right shoulder and was seen working his right shoulder range of motion as he walked (not limping) off the field.  (At the end of his presser, when asked about his shoulder, he answered with a quick “it’s OK”.)

On Monday, Roethlisberger emailed Pittsburgh reporter Ron Cook to say that based on the MRI, his ankle checked out OK and he “aggravated an old foot fracture but nothing severe”, reiterating that he would be good to go versus Kansas City in the Divisional round game.

And we all wondered…what old foot fracture?

Welcome to the greatest mystery in the endless archives of Ben Roethlisberger’s injuries.  Let’s take a quick ride in our time machine and sort it out.

2010  Ben sustained a right foot injury in the first quarter of the week 12 overtime win over the Bills in Buffalo.  Limping heavily, Ben lead his team to victory.  During the following week, Ed Bouchette reported in the Pittsburgh Post-Gazette that, contrary to what the team reported, the QB’s foot was broken, not sprained.  Bouchette detailed it as a 5th metatarsal fracture.  The Steelers countered with an official statement from the team spokesperson:

Remember, this was the season when Ben missed the first 4 games serving his suspension.  Upon his return, he was sacked between 3 and 5 times per game behind a very ragtag O line every week leading up to that Bills game.  Easy to think that he sustained his original foot fracture sometime in that stretch, right?  Nope.  He wasn’t on the injury report that season until after the Bills game.

Roethlisberger spent the rest of the season in a cleat specially modified with a metal plate to provide support for his injured foot, making it all the way to the Superbowl (we won’t talk about how that ended).  Although he limped noticeably without the reinforced cleat, he was surprisingly very much his usual scrambling backyard football self in games.  And while he had surgery to piece his nose together after Ravens DT Haloti Ngata rearranged it in week 13, Ben never required surgery for his foot.  He attributed that in part to the NFL lockout, which gave him extra time to heal.

OK, so if it was already an old injury in 2010, when did Ben break his right foot?

2005  In his rookie year, Ben made it all the way to the AFC Championship and earned Offensive ROY on the way.  Following the loss to the New England Patriots (sorry to bring that up), the rookie told reporters that he played the second half of that game with broken toes.  He thought that he had sustained the injury by jamming his foot in the ground during a 13-yard scramble.  The following day, then-HC Bill Cowher denied his QB’s claim, telling reporters that this had not come up in Ben’s end-of-season physical the day before and that – wait for it – Roethlisberger had “aggravated some toes he had broken in the past”.  Wait, what?  Conspiracy theorists going through this history would by now be assuming that somewhere in the South Side facility is a piece of paper with that particular phrase pinned on a bulletin board.  According to Cowher it wasn’t the 2004-2005 season when Ben originally broke his toes either.

So if the broken toes didn’t happen during the AFC championship game or during that rookie season, when was it?  It seems unlikely that Ben sustained any significant toe or foot fractures during his college career at Miami (Ohio) unless it occurred during his red shirt year.  Once he started at QB, he played every season and also punted regularly in his second and third seasons…with his right foot.  Not surprisingly, there is no information on player injuries available from his high school career for either the football or basketball teams.

But according to Ben, he has actually broken almost all of his toes at some point.  And it is the Post-Gazette’s Ed Bouchette who uncovered the truth according to Ben Roethlisberger:

Ahhhhh, so most of the broken toes were determined by a clinical diagnosis by the young QB +/- the athletic trainers, not X-ray.  I mean, yeah, most of us would probably assume our toes were broken if they were bruised and swollen.  And the benefit of an X-ray is really just to confirm the diagnosis.  Even in a Division I school they may not bother with an X-ray in that scenario.  But I bet Ben had not just an X-ray but an MRI as well in 2010 after the Bills game.

Here are the different types of 5th metatarsal fractures (courtesy of the American College of Foot and Ankle Surgeons) as well as an X-ray showing a Jones fracture: 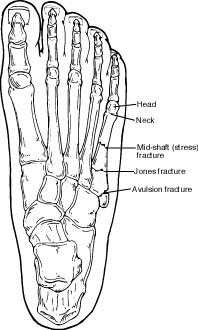 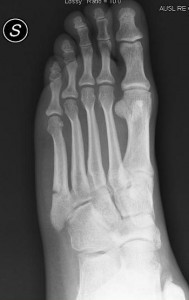 So what was the exact nature of Ben’s right foot injury this past Sunday?  Even with the modern miracle of the internet, I don’t think we will ever know.  I’m not sure anyone does.  And the head coach of the Pittsburgh Steelers is almost definitely not going to tell us.  My guess is that he did have a 5th metatarsal injury back in 2010 and when Cameron Wake landed on Ben’s right foot a few days ago, it resulted in some inflammation in that area.  Even if Ben has had fractures of his distal toes in the past, it’s unlikely that the mechanism of this recent injury would have had any impact.  And I doubt this will affect his mobility or performance this coming Sunday.  As he commented the day after the Wild Card game once the boot was off, it was merely a precaution.

It’s all just entertaining speculation as we wait not quite patiently for the Steelers to meet the Kansas City Chiefs and hopefully beat them to advance to the AFC Championship once again.  And this time, make it back to the Superbowl again.  Here we go!