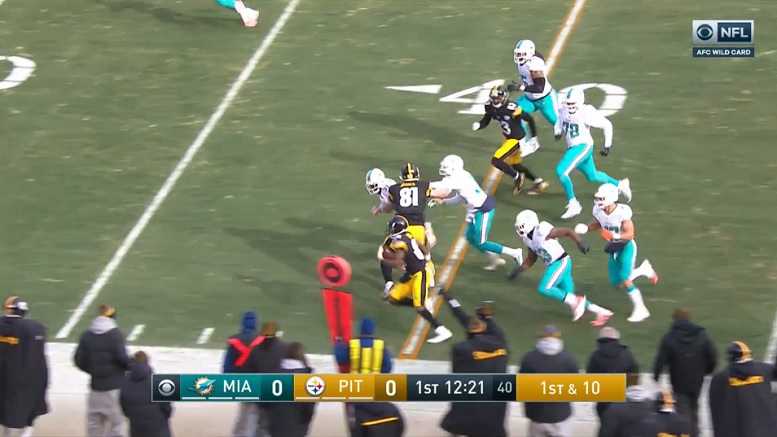 Pittsburgh Steelers tight end Jesse James certainly won’t be going to the Pro Bowl anytime soon but with that obvious fact out of the way, the Penn State product has shown some improvement in all areas of his game in just his second season in the league.

In the Steelers Sunday Wild Card win over the Miami Dolphins, James made a few key plays that certainly were noticeable.

The first one came during the 50-yard catch and score by wide receiver Antonio Brown on a simple screen play and included James getting to the edge and effectively walling-off two Dolphin defenders to clear a path down the left sideline for his teammate.

The second play James made against the Dolphins included him recording his only reception of the game and he did so in quite a peculiar way.

On 1st and 10 from the Dolphins 30-yard-line with 1:23 left in the first half, Steelers quarterback Ben Roethlisberger made an ill-advised short throw to James near the middle of the field that probably should have been intercepted by Dolphins defensive lineman Earl Mitchell, who had dropped into coverage after the snap of the football. The ball, however, bounced off of Mitchell’s shoulder pad and the 6-7 James snatched it out of the air with two hands and secured it above his head as multiple Dolphin players attempted to jar it loose.

During his Tuesday press conference, Steelers head coach Mike Tomlin was surprisingly told by a member of the media that “he has to be satisfied” with James’ progress in his second year in the league.

“I don’t have to be [satisfied],” Tomlin replied. “He did some good things, but if you ask Jesse, he’ll tell you, like I feel, his better days lie ahead. He’s a really cerebral young guy. He’s always in control of his emotions. He takes an analytical approach to preparation and getting better, and I think that approach is going to aide him. He did some good things in that game (Miami), but boy, he’s continually evolving, as are we all.”

After catching just 8 passes for 56 yards and a touchdown during 2015 rookie season, James caught 39 passes for 338 yards and 3 touchdowns in the recently concluded 2016 regular season. While his receiving numbers did increase, it’s probably worth noting that his 8.7 yards per catch average was still lower than any season average that former tight end Heath Miller ever posted during his 11 seasons in Pittsburgh.

While James has indeed improved this season as a blocker, nobody is going to dare compare that part of his game to that of former Steelers tight end Matt Spaeth, who played 9 seasons in the NFL.

As Tomlin indicated Tuesday, better days hopefully still lie ahead for James with a few of those maybe coming in the remainder of the playoffs and starting Sunday against the Kansas City Chiefs.