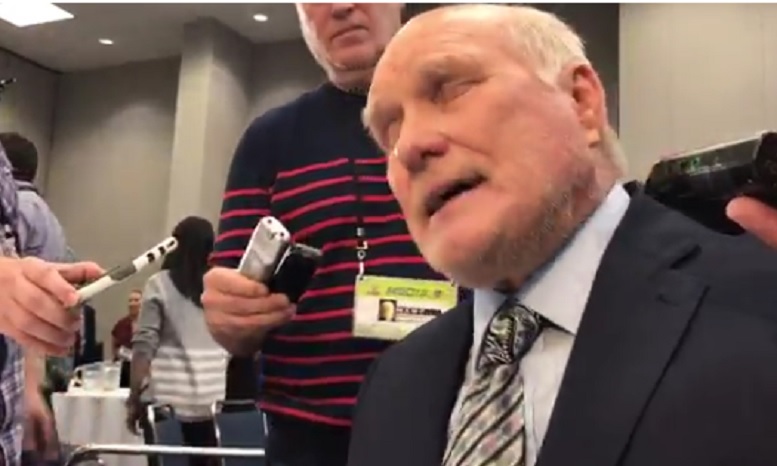 Terry Bradshaw just cant seem to stay out of the news when it comes to his former team.

Bradshaw, who is currently in Houston for Super Bowl LI, was asked by a reporter Tuesday about Steelers quarterback Ben Roethlisberger saying last week on his radio show that he’s currently unsure if he’ll play in 2017. The Hall of Fame quarterback didn’t hold back.

“When he said that, I thought it was the pity move,” Bradshaw reportedly said.

Bradshaw then proceeded, as you can see in the video below.

“If Ben was sitting right here, I’d say ‘Ben, why’d you say it?’ Don’t say that, because It gets blown out of proportion. You make the organization uncomfortable. I wouldn’t have said that. Keep that quiet.”

Bradshaw was then asked if he thought Roethlisberger was trying to send a message of some kind.

“Who’s he sending a message to? Coach? I’m already in enough trouble with that coach,” Bradshaw said.

Bradshaw then proceeded to try to get his foot out of his mouth by praising Roethlisberger.

“Ben and I have had our moments, but I’ve said this — if I could take one player, today, and build my team around, it’d be him. Because hes strong. Hes big and he’s strong and hes got a great arm.

Bradshaw, if you remember called Steelers head coach Mike Tomlin a ‘cheerleader guy” several weeks ago and those comments were obviously met with a lot of criticism not only from the fans and media, but Tomlin and team president Art Rooney II as well.

“I didn’t agree with it, obviously,” said Rooney when addressing the media Tuesday. “I’m not sure what prompted Terry to make that type of a comment. I haven’t talked to Terry about it. Maybe I will at some point. He’s still an all-time great Steeler and still love him for everything he did for this franchise. But he must have had a lapse in judgment.”

For the record, I think Roethlisberger was indeed attempting to send some sort of message last Tuesday. If he wasnt, then maybe he truly does have a few concerns about his future health. Regardless, Roethlisberger is still expected to play in 2017 and beyond.

I guess this is just another example of Terry being Terry and we’ll have to just leave it at that.

Naturally, Terry Bradshaw was asked about Ben Roethlisberger pondering retirement: "When he said that, I thought it was the pity move." pic.twitter.com/b4aPxyGZm8