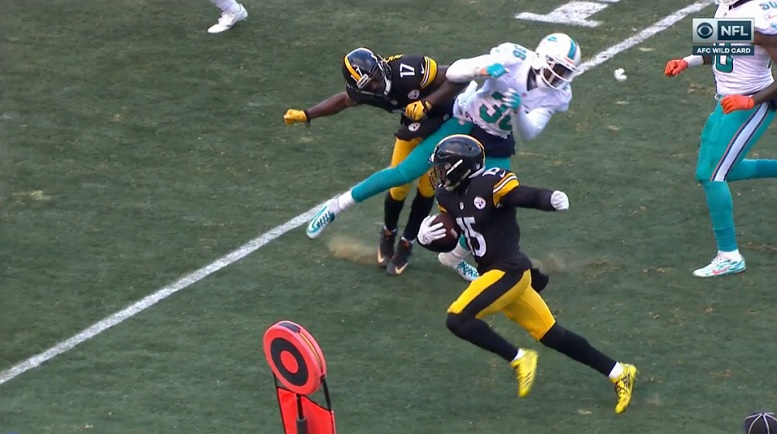 As it turns out, Pittsburgh Steelers linebacker Bud Dupree wasn’t the only player fined for his hit on Miami Dolphins quarterback Matt Moore during last weekends AFC Wild Card game.

According to Ray Fittipaldo of the Pittsburgh Post-Gazette, Steelers wide receiver Eli Rogers was also fined for his illegal blindside hit during the third quarter of the game against the Dolphins.

Rogers’ illegal hit came near the end of a 3rd and 6 pass completion from Steelers quarterback Ben Roethlisberger to wide receiver Demarcus Ayers with 4;55 remaining in the third quarter. Ayers gained 11 yards on the play and the Steelers were penalized 15 yards.

You can see the replay of Rogers’s hit on Dolphins cornerback Tony Lippett below.

While Rogers was reportedly fined $24,309 for his blindside hit, he obviously won’t have to pay all of that being as it is more than 25% of what he earned for playing in the Wild Card game.

Rogers’ hit looked very similar to the one that New England Patriots wide receiver Michael Floyd had on Lippett during the final week of the regular season. Floyd, however, was not penalized nor was he fined.