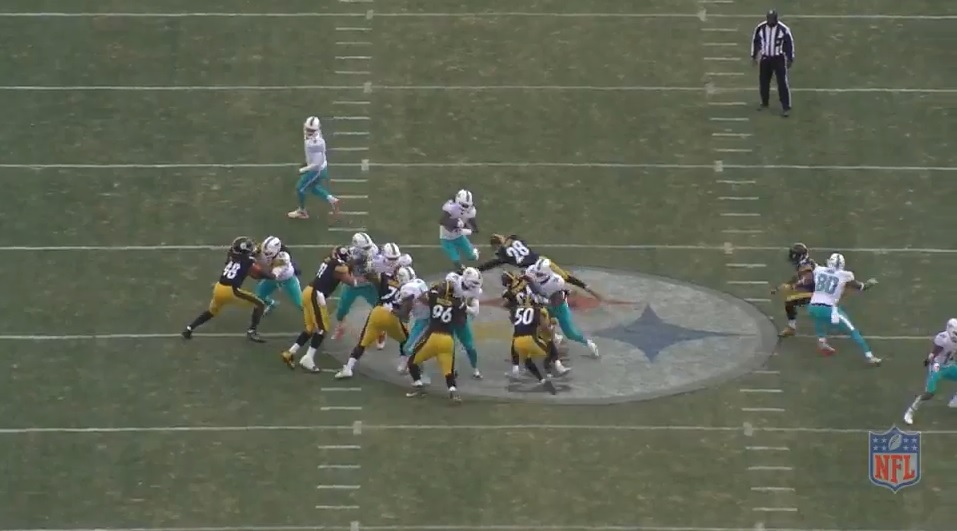 With all of the talk leading up to Sunday’s Wild Card round game between the Pittsburgh Steelers and the Miami Dolphins at Heinz Field centered around the Week 6 matchup between the two teams, in which the Dolphins came out on top 30-15, the concern about the Steelers run defense and ability to tackle seemed to fire up the defensive unit.

Against Miami, Pittsburgh put on one of its best displays of tackling this season, rarely missing tackles that led to big plays while also bringing a significant physical element to the game that had been missing for bits and parts of the season.

Fresh off of the 30-12 win in the Wild Card round for the Steelers, lets take a look at the missed tackles report, playoff edition.

Much like in the regular season, Ryan Shazier led the Steelers in missed tackles on Sunday, but overall the speedy inside linebacker was outstanding coming up against the run and dropping into zone coverage, even recording an interception.

Mostly, I think the Steelers defense was so tired of hearing about how Miami running back Jay Ajayi went off against them in Week 6, and I think that was pretty evident on Sunday as the defensive unit was fired up and swarming to the ball on every Ajayi carry.

A lot of that had to do with the presence of James Harrison in the lineup, who played under half the snaps in that Week 6 loss before playing the entire game on Sunday, putting on a dominant performance for a 38-year old linebacker.

With Harrison setting the edge — and the tone — the defense flew around and made plays all game long.

One area of concern though from Sunday’s game is the tackling on special teams, which has gotten progressively worse these last few weeks and could be a serious problem on Sunday with Kansas City’s Tyreek Hill set to touch the ball as much as possible in all phases of the game.

Kenyan Drake, who is less dynamic and more of a power guy, had two long kickoff returns on Sunday due to missed tackles/lane fills, so lets take a look at those first.

In the first clip, Tyler Matakevich has a clean shot at Drake on the return, yet he goes in for an arm tackle and allows the returner to power right through to pick up additional yardage.  Fortunately for Matakevich, Vince Williams is able to clean up the miss a few yards later, negating any sort of big play.

Later in the game with the Steelers up 30-6, Drake strikes again, hitting a huge seam to cross over into Pittsburgh territory. You could probably give Al-Hajj Shabazz a missed tackle on this (I didn’t because I felt he was trying to cover two lanes at once and was out of position), but Darrius Heyward-Bey ends up slowing Drake down late in the run despite missing the tackle.

Shabazz is able to wrestle Drake to the ground, but you can see the concern with the coverage unit and what could happen with Hill this week.

Now that we’ve taken a look at special teams, let’s jump over to the defensive side of the ball and look at a few key misses in the game.

Before the snap, Shazier is moving towards the line of scrimmage on a run blitz. By doing that, Shazier is able to get inside leverage on Miami left tackle Branden Albert, putting himself into the backfield at nearly the same time as the handoff.

Granted, Shazier has to deal with a strong Albert on his back trying to push him out of the play, but Shazier gets a good shot at Ajayi right in the backfield, but he doesn’t wrap up against the powerful runner, allowing him to bounce off.

Fortunately for Shazier, a host of Steelers defenders are there to make the gang tackle on Ajayi for a one-yard loss.

Sean Davis is becoming one heck of a blitzing weapon for this Steelers defense. Since being inserted into the starting lineup he’s lived around the line of scrimmage and made some big plays in the backfield week-after-week.

This wasn’t one of them though. The rookie does a great job of diagnosing the play to fly up from his safety position untouched to get a free run at Ajayi. Unfortunately for Davis, his angle is slightly off, which forces him to dive for an arm tackle attempt, leading to him coming down awkwardly on his shoulder.

That’s a winning formula, and one the Steelers hope to duplicate on Sunday on the road against the Kansas City Chiefs.