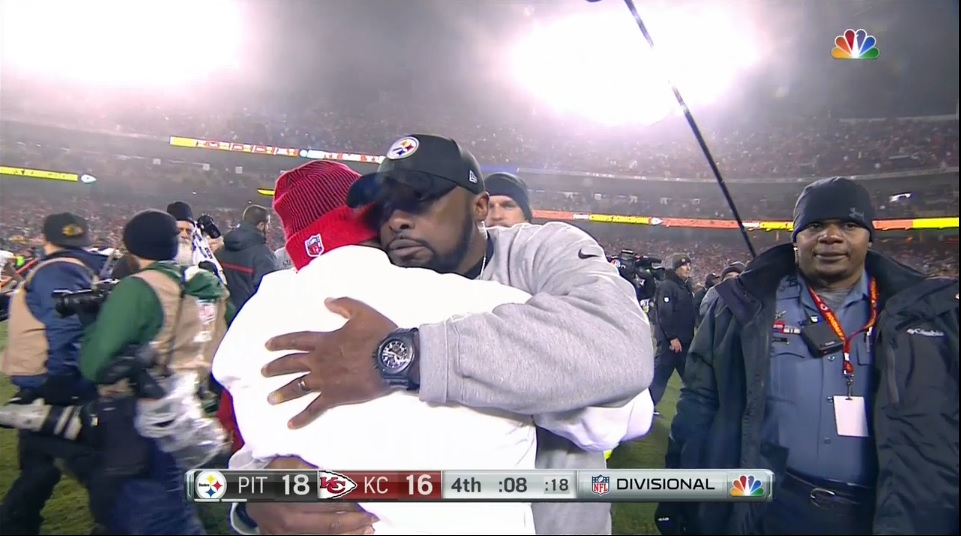 We’ll see you in Foxboro.

Le’Veon Bell: Another magnificent performance from the best back in the league. He casually rebroke the Pittsburgh Steelers’ single game rushing record he set last week, finishing today with 170 yards on the ground. He showed patience that the booth drooled over the entire game while running with power and the ability to make big plays. Another incredible game.

Offensive Line: Gotta give it up to the whole crew. No one person to single out. They paved the way for Bell and kept Ben Roethlisberger almost spotless, one coverage-induced sack aside. Think he was hit just once or twice the entire night. They’ve gotten better each and every week and will finally get some love in the national media.

Chris Boswell: Duh. Boswell was the offense, supplying the only points of the game. Six field goals, a playoff record by anyone. And they were pretty much all no-doubters. He also boomed a couple kicks out of the end zone to minimize Tyreek Hill.

Vince Williams and Special Teams: They were terrific tonight. Hill averaged a Toussaint-like 18 yards per carry with a long of 21. Williams set the tone with two tackles, including one big smack, and the whole group stepped up tonight. Kudos. That was huge.

James Harrison: He ran like it was his last game – because maybe it was – and had the key play of the game, drawing a holding call that negated the Chiefs’ two-point conversion that would’ve tied the game. It was his patented rip move that did it, as it did throughout the whole game, notching him another sack. That move is legend-wait for it-dary.

Defensive Line: They were stout at the point of attack and were able to collapse the pocket. The Chiefs had zero run game, making them one-dimensional and putting too much of the game on Alex Smith’s shoulders. Kudos to Stephon Tuitt, Javon Hargrave, and the gang.

Jesse James: Very quietly had a NFL high 83 yards today, getting wide open over the middle twice. It was the second most yards he’s ever had in a game, college or pros. Stepped up big for Ladarius Green the second time around.

Ross Cockrell: Thought he was taking a bit too much heat on Twitter but it wasn’t his best game. Did appreciate his increased physicality but a couple of deep passes were made Cockrell’s way. That 3rd and 20 was a killer.

Red Zone Offense: Awful. Just awful. Officially 0-4, which is probably as bad as it’s been in the last five years. For an area they rep all the time, it’s unacceptable. Some is on Todd Haley, some on Roethlisberger. Neither great tonight.