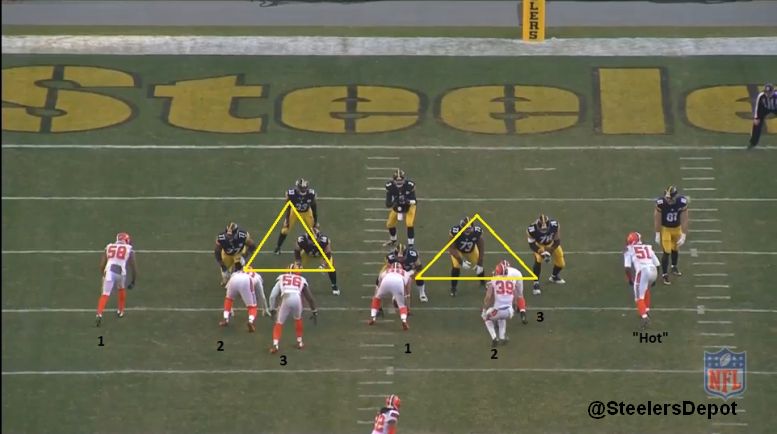 The final one of the regular season. And there was a lot more to wade through here than basically any other game this year. Let’s look at the four sacks. 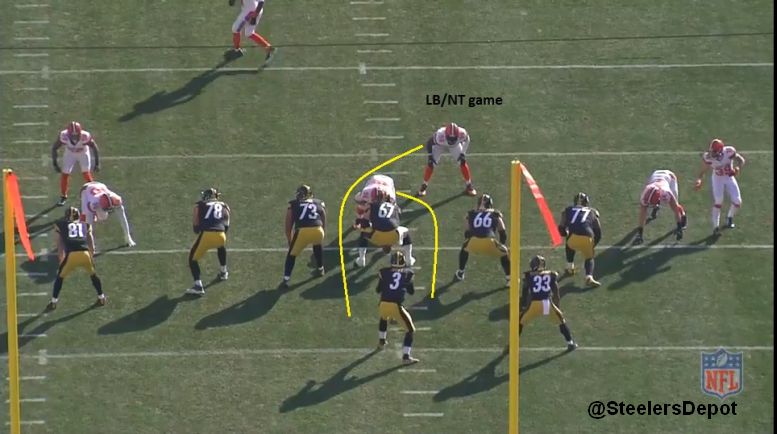 B.J. Finney looks to pick up the looping linebacker and I guess he’s trying to pass off the nose. But David DeCastro and Marcus Gilbert are picking up their part of the triangle. That leaves Fitzgerald Toussaint on the DL up the A gap. Not a good place to be. 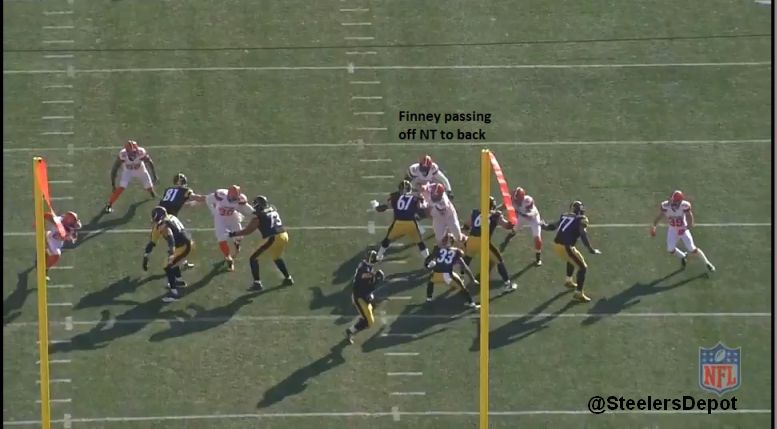 And then Finney doesn’t even pick up the linebacker, again, I guess thinking he can pass him off. So the DL is creating penetration and the LB is free. 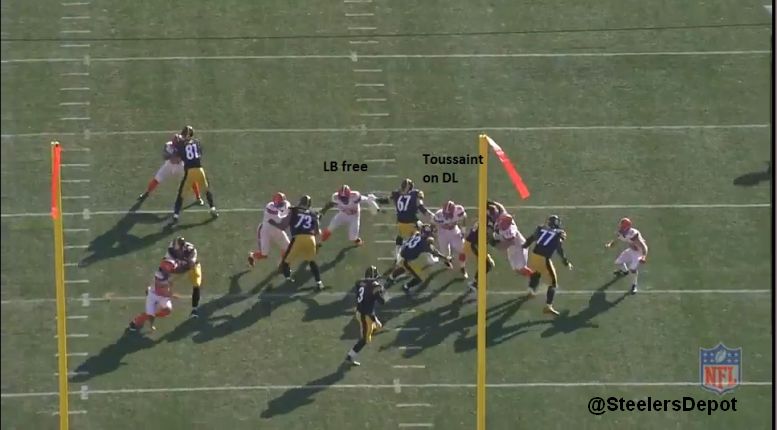 Back should never be in that situation. In hindsight, Finney stays on his man and Toussaint is responsible for the linebacker. But it all goes sour and Landry Jones is crushed. Good man pressure from Cleveland.

2. 6:21 1st, 3rd and 9. 11 personnel. 6 block vs 6 rush. Man pressure again. Not sure what Toussaint is doing here. You could argue he should be aligned across the formation, he’s part of the triangle read to that side with Finney in a half-slide to the left, but sometimes, the back is benefited by coming across and in a better position to square up than he is being aligned on the same side. 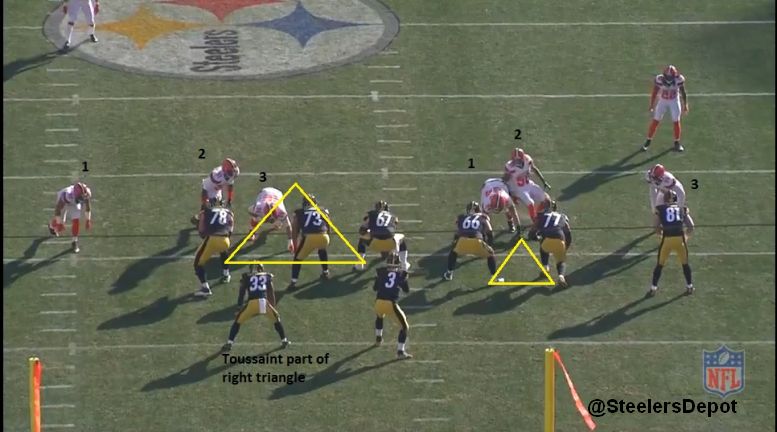 Instead, he looks left – to his side – pre-snap. Makes him late to be able to get over and pick up the LB coming through the B gap to the right side. He’s late, whiffs, and Jones goes down hard. 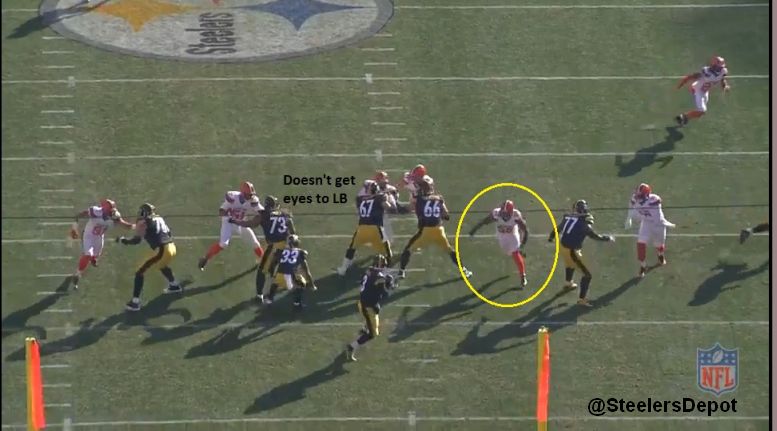 3. 12:47 3rd. 3rd and 7. 11 personnel. Browns switch to zone pressure here again, on third and long. Six block vs a five man rush. Marcus Gilbert gets long-armed into the pocket. 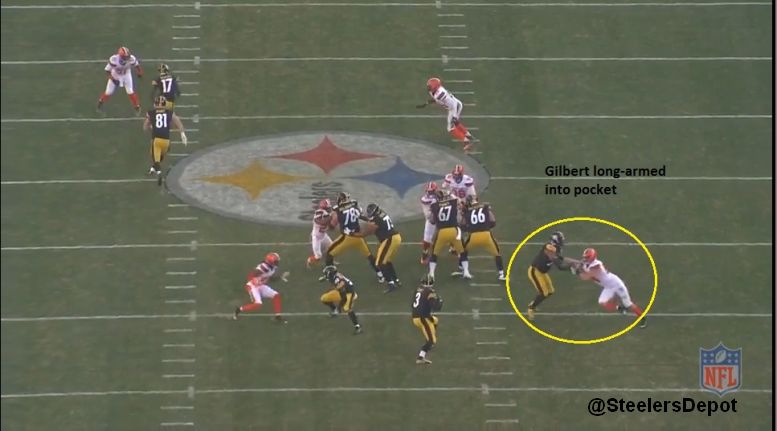 But the pocket is still decently formed and the pressure is picked up well. Jones looks to climb the pocket but trips over Gilbert’s foot and going to the ground. Has to have a better feel in the pocket and more maneuverability than what he showed. Gilbert didn’t help matters a lot either and did get walked back. 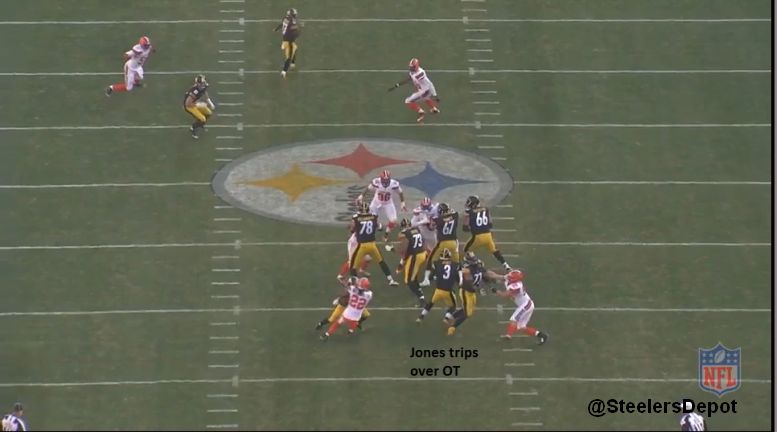 Blame: Half on Jones, half on Gilbert

4. 2:04 4th. 3rd and 6. 11 personnel. Six block vs six rush. Man pressure again from the Browns. Again, all about reading the triangle. Break up the six blockers into two pairs to pick up each half of the blitzers. Work inside out and let the ROLB go. If he comes in on the rush, the Browns have more rushers (seven) than blockers (six) and the quarterback must throw the ball out hot.

The ROLB ends up dropping, making this six vs six. But Ramon Foster still slides down and safety Ed Reynolds III, who did roll down late, comes in free up the middle. Not on Toussaint, he’s got the linebacker in the opposite A gap. 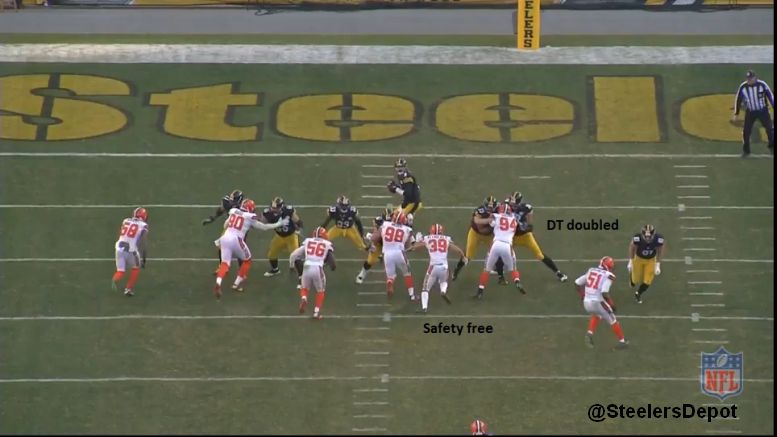 Reynolds is free up the middle and takes down Jones. 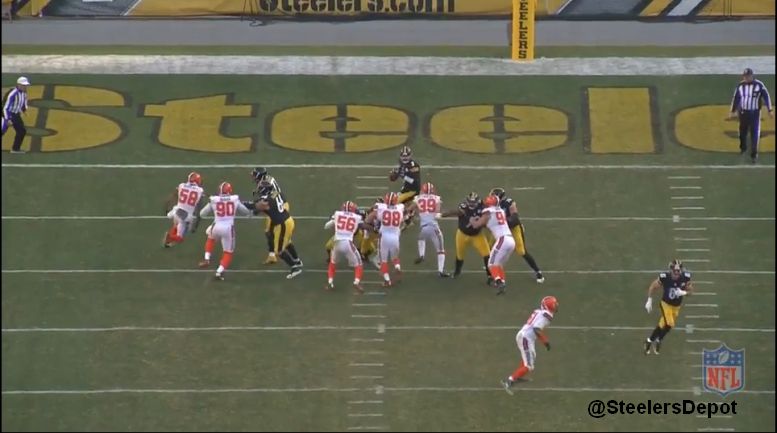 Can’t allow interior pressure like that. If anyone comes free, it has to be someone on the edge so the quarterback can climb and roll out. And I think the pressure falls on Foster here. Hats off to the Browns though; were really aggressive all day.