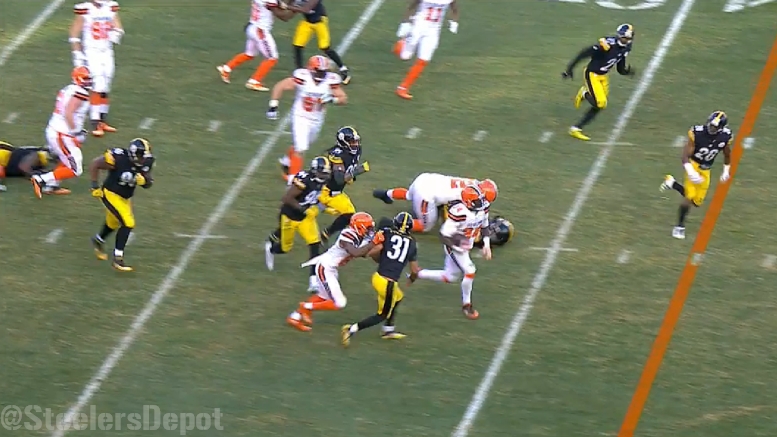 Sunday’s defensive performance against the Cleveland Browns in the regular season finale was mostly lackluster for the Pittsburgh Steelers, which was a point made by Ryan Shazier following the game about how guys seemed to buy into the notion that the game was mostly meaningless.

That showed up in the missed tackles numbers that I was able to gather from the tape of Sunday’s game, starting with Shazier himself, who missed three total tackles, including a big missed tackle on Isaiah Crowell’s 67-yard scamper in the fourth quarter to set up George Atkinson III’s touchdown on which Shazier missed another tackle.

Overall, it was a slight improvement from last week against the Baltimore Ravens (21 missed tackles), but it’s still an area of major concern for the Steelers defense rolling into the playoffs.

Let’s take a look at some of the missed tackles from Sunday’s game.

On this first quarter run by Crowell, Shazier does a good job of sliding over into the hole to try and make the stop.

Granted, Cleveland center Anthony Fabiano has a hand on Shazier’s shoulder, which could have diverted the Steelers linebacker off of his path just a bit, but Shazier has to do a better job of working through contact to make a stop in the hole.

Late in the first half the Browns were driving deep into Pittsburgh territory on yet another impressive drive led by Robert Griffin III, but on this play it was Crowell once again who did damage to the middle of the Pittsburgh defense.

On the read-option out of shotgun, Crowell hits the seam between the center and the left guard like a bullet, zipping into the second level where rookie Sean Davis has to make a one-on-one stop to cut down on the big play.

However, Davis comes up small. Since being inserted into the starting lineup, Davis has been a marvel on defense, coming up with big stops and big plays, serving as another physical tackler in the secondary next to Mike Mitchell. In frustrating fashion, Davis goes diving at ankles here instead of looking to drive through Crowell’s legs to make the play.

By missing the tackle, Davis allows Crowell to rumble for a handful of extra yards before William Gay is able to wrestle him to the ground to prevent a touchdown.

Seeing a trend here? Crowell gashed the Steelers up the middle all game long, capping it off with this 67-yard jaunt to set up the game-tying touchdown from Atkinson III late in the fourth quarter.

This is just a simple run here by the Browns, and once again Shazier is right in the hole to make the play one-on-one against Crowell.

However, Shazier over-pursues slightly, leaving a big cutback lane to his left for Crowell, who hits it, running right through Shazier’s arm-tackle attempts for the big gain.

At times Shazier can do everything perfectly until the very end, sliding too far over in the hole or going for an arm tackle instead of putting his shoulder into the ball carrier. It can be maddening at times, but the talent this man possesses is through the roof.

Often times early in a player’s career you have to take the good with the bad, and that’s been the case all season with Shazier. That being said, I’m sure all of Steeler Nation would agree there’s no other ILB around that they’d want manning the defense next to Lawrence Timmons other than No. 50.