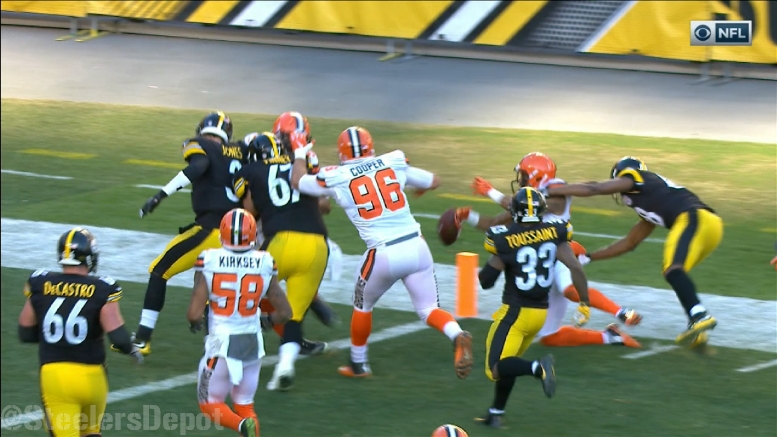 You may have noticed in watching today’s game that, while the Pittsburgh Steelers certainly took the opportunity to rest a number of healthy starters and kept pretty much everybody dealing with injuries out, by no means were they content to end their season heading into the playoffs with a loss after riding a six-game winning streak.

In overtime, with the Steelers in a long field-goal range, Mike Tomlin opted to go for it on fourth and two after the Cleveland Browns had already gotten a field goal on their opening drive. That meant that if they did not convert, they would lose.

Landry Jones hit Demarcus Ayers, the rookie seventh-round wide receiver who spent almost all of the regular season on the practice squad, on a crossing route for six yards. On the next play, he found Cobi Hamilton in the end zone for the 26-yard walk-off touchdown that sent them into the playoffs on a seven-game winning streak, the longest winning streak since the 2004 season.

There were plenty of opportunities over the course of this game during which the Steelers could have chosen to just pack it in and take the loss in a game that meant nothing to them as far as their playoff future was concerned. After all, they got out to an early 14-0 deficit, and the offense didn’t seem to be able to do anything.

But a botched snap after a punt was recovered by a hustle effort from rookie safety Sean Davis, who also had a sack in the game. That ignited the offense, who ended the half with a touchdown, and which then scored 21 unanswered in total.

In between, however, Jones nearly threw a pick-six, which was only saved by an extra effort play from Darrius Heyward-Bey, forcing a fumble out of bounds for a touchback instead of a defensive touchdown. Jones then proceed to lead a touchdown drive that tied the game at 14.

Following another touchdown to go ahead, the defense yielded a response score on the strength of a long run. After the offense stumbled, it looked like the Browns would go up ahead late in the fourth quarter, but a forced fumble at the three-yard line—their second turnover inside the five—prevented the score.

And, of course, we already talked about how the overtime period unfolded. Even on the defensive side of the ball, Mike Mitchell was utterly livid and beside himself when he was improperly flagged for a facemask penalty on a third-and-goal play that was stopped. You could hear him plead his case via the official’s microphone.

The defense responded to that affront with another stop to hold the Browns to a field goal—their second attempt of the game, as the first one missed after Daniel McCullers recorded his first sack of the season on third down for a loss of eight.

The Steelers put together no shortage of plays on the field today that proved that they were motivated to get this win, no matter how meaningless it might prove to be in the grand scheme of things. Nobody, of course, wants to head into the postseason with a loss, especially when it breaks up a winning streak.