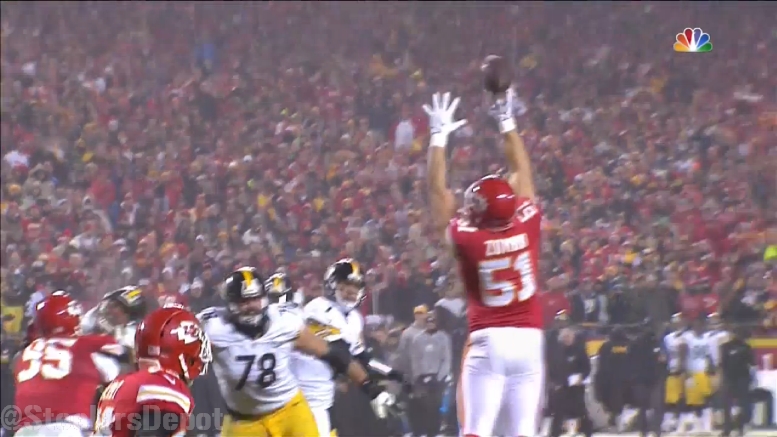 If there is one thing that we should be taking away from last night’s game, it should be, quite simply, that the Pittsburgh Steelers secured the victory, and in doing so paved the way to another AFC Championship game appearance. It ultimately doesn’t matter how you win, as long as you win.

But if there is room for one more thing to take away from what we saw last night, it was that the Steelers’ work on offense in the red zone was awful, and that was the result of a confluence of reasons, including both play-calling and execution, which is typically the case when things go this badly.

The Steelers scored six times on the offensive side of the ball over the course of the game, and none of them came via the touchdown. they had to settle for a field goal six times, fortunate to make all six, and that included four trips inside the red zone, with a goal-to-go mixed in.

All six of those failed drives, however, still cracked at least the 30-yard line of the Chiefs, and that needs to be factored into the discussion as well, when discussing the Steelers’ inability to get the ball into the end zone despite being able seemingly all night to drive the ball up and down the field. Seven drives in all inside the 30-yard line, and no touchdowns.

That is simply unacceptable, and that should go without saying. I’m sure that will be the line every single offensive player will be towing over the course of the week, and how that will need to be far better next week in New England, but, of course, they talked about last week’s second-half struggles without improving the results, either.

If any one person deserves the majority of the blame for the Steelers’ struggles deep in Chiefs territory, it would have to be quarterback Ben Roethlisberger’s, whose stat line within the 20-yard line was abysmal.

The Pro Bowler completed just one of seven pass attempts in the red zone last night for one yard. He also took a sack and threw an interception on first and goal. He appeared to run a hot call to Antonio Brown, with the rest of the offense not cued into the play. The right edge defender was unabated into the throwing lane, batting the ball up in the air and allowing it to be intercepted in the end zone.

It should be stated that Roethlisberger nearly had at least one touchdown pass in the game, which Brown failed to secure after cornerback Marcus Peters ripped it out of his grasp. There was another play late in the game in which Eli Rogers failed to adjust to a slightly high pass that could have been a touchdown.

But many, and I believe rightfully, are blaming some of the play-calling decisions in close quarters, including calling two passing plays after earning a second-and-two from the four-yard line early in the game. The offensive efficiency in scoring range simply needs to be far better against the Patriots.